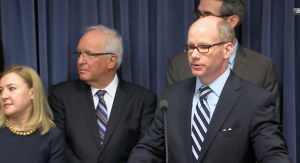 This was the rhetorical question posed in 2016 by columnists and political analysts in Chicago and downstate after the first year of budget impasse in the General Assembly.  Gov. Bruce Rauner’s campaign promises of reforming income taxes, redistricting and workman’s compensation were still relatively new, and Democrats in the General Assembly were becoming seen as obstructionists.

A year later, 21 months without a budget, and after a “Grand Bargain” suite of bills fell apart in the Senate, rank-and-file Democrats and newcomers finally responded with an  “Illinois Comeback Agenda” released March 29. A website with the proposal was launched at www.combackil.com.

“A handful of us were so frustrated with the lack of progress and the inability to move any agenda forward,” said Senate Leader Pro-Tem Don Harmon (D-Oak Park).

“We had a real sense from our constituents that they felt like Springfield was broken and that it wasn’t working for them.”

The Democrats’ plan differs from Rauner’s in several ways: Democrats call for a graduated income tax, which would require an amendment of the Revenue Article of the Illinois Constitution.

“There’s quiet support among Republicans,” said Harmon, who has introduced legislation in the past that he said would lower taxes for “94 percent” of Illinois residents.

Guzzardi said as income among the top earners in Illinois increased, it made sense for state taxation to follow. Rauner’s Turnaround Agenda called for a property tax freeze and Rauner’s 2018 budget only reluctantly proposed raising the Illinois flat income tax back up to around 5 percent from 3.75 percent.

Rauner’s plan called for redistricting reform to dislodge incumbents from their seats, but the Democrats see redistricting as an attempt to take representation from communities of color, Democrats said. Instead, the Comeback Agenda proposes leveling the playing field with a campaign “Small Donor Democracy Matching Fund” to allow lower-budget campaigns to compete with billionaire-financed campaigns — such as Rauner’s.

Both the governor and the Democrats have focused on fixing Illinois’s school funding mechanism, which some have called the most inequitable in the country because it depends so heavily on local property taxes.

The Democrat plan also addresses the funding crisis in Illinois higher education, which they say is neglected by Rauner.

The governor just signed a criminal justice reform bill into law that relaxed parole options for people convicted of 2nd Degree felonies. The new law also moves forward to provide back psychological services for victims of crime and those caught up in the criminal justice system.

Republicans were quick to criticize the Democrats’ new agenda.

“While it’s nice to see Democrats join the governor on criminal justice reform and improving schools, it’s alarming that their agenda appears to include nothing to lower property taxes or increase jobs throughout the state,” said a statement from Illinois Republican Party Spokesman Steven Yaffe.

“And any effort to fix the political system that doesn’t include term limits or redistricting reform isn’t a serious one. Illinoisans want a balanced budget with real spending caps, a true property tax freeze, and economic reforms to grow jobs. Democrats should add these key items to their agenda if they are serious about improving Illinois.”