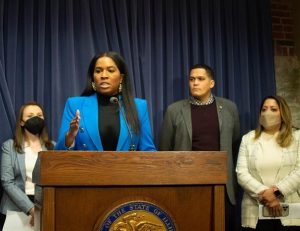 SPRINGFIELD – Democrats in the General Assembly on Friday outlined community investment proposals that they say will be part of a broader crime reduction package that is still being negotiated as session enters its final week.

The measures outlined by House and Senate Democrats stand in stark contrast to the tough-on-crime sentence enhancements and mandatory minimums pushed for by Republicans. Instead, they focus on what the Democrats billed as long-term violence interruption programs.

The lawmakers said they came from weeks of discussion with a public safety working group that included law enforcement groups and crime victims.

Sen. Robert Peters, D-Chicago, said the investments outlined in the proposals are aimed at addressing a “30- to 40-year Groundhog Day-like history” of what he called the “failed tough-on-crime status quo.”

Their proposals were largely appropriations-based, requesting nearly $240 million in funding increases from the current fiscal year for intervention programs such as early childhood education and after school programs.

But they also included a grant program for establishing anonymous tiplines across the state in an effort to help solve crimes, as well as a program aimed at expanding a witness protection program for those involved in bringing violent criminals to justice.

Those programs, according to House Assistant Majority Leader Jehan Gordon-Booth, D-Peoria, would have the most immediate impact on crime reduction of the measures mentioned Friday at the Capitol news conference.

“We have to be mindful that when we’re seeing crime and violence, oftentimes, the majority of the time in all of our communities, the crime is being perpetuated …(by) a small group of folks,” she said. “If we give law enforcement the tools to be able to solve the crimes, and we’re able to get these small group of folks off the streets, that produces a significant turnaround that we see in communities relatively quickly.”

Gordon-Booth gave a personal example. In 2014 her 22-year-old son Derrick Booth Jr. was killed at a birthday party. A witness came forward to identify the killer, who Gordon-Booth said would still be at large without the testimony. 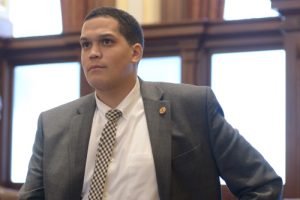 “One of the pieces that gets left out of that conversation is, what does that individual have to go through in order to be a witness to a homicide?” she said.

They have to witness the crime, but also be willing to be a part of a prosecution, she said.

“They also have to go and take the stand in court and stand before that individual who they saw take someone else’s life,” she said.

Gov. J.B. Pritzker proposed funding a Gang Violence Witness Protection Program with $20 million for the upcoming fiscal year. Peters has a bill, Senate Bill 4203, appropriating that amount while requesting another $1 million to fund grants to create anonymous hotlines across the state and fund cash rewards for tipsters.

The financial assistance program would go online in January 2023, per the bill.

The plan would also create a crime reduction task force that would include lawmakers, law enforcement, legal and criminal justice professionals, crime victims and witnesses. The task force would meet four times to discuss violence prevention measures and report back to the governor and General Assembly by March 1, 2023.

Democrats made clear the long-awaited package is still under negotiation in the General Assembly, particularly the funding components.

The Democrats said the programs were identified because of their effectiveness, but the dollar amounts are subject to change.

“They’re programs that we’re already funding, what we’re pushing to do is to increase funding of these programs because we know that they work,” Sen. Celina Villanueva, D-Chicago, said.

Gordon-Booth also introduced an amendment to House Bill 1360, which would create a “co-responder” pilot program that sends social workers alongside officers of the police departments in East St. Louis, Peoria, Springfield and Waukegan. The social workers would look to address mental health issues.

Republicans in recent months have been hitting Democrats on crime, including for passing a criminal justice reform in January 2021 known as the SAFE-T Act.

While Republicans have referred to that law as the “defund the police” act, it did not take any action affecting law enforcement funding, although it did add requirements that departments adopt body cameras on a staggered timeline with the smallest departments being required to adopt them by 2025. The governor’s budget includes $10 million in grants to fund body cameras.

In a news conference on Thursday, March 31, House Republican Leader Jim Durkin, of Western Springs, said the measure was a “de facto defunding of the police” that has been “catastrophic towards morale in police departments.”

The SAFE-T Act eliminates cash bail beginning next year in favor of a system prioritizing the offender’s threat level over ability to pay. It’s to be defined in the courts. The act also changes use-of-force guidelines for law enforcement, creates a new police certification system and expands detainee rights.

Peters rejected Republican attacks on the SAFE-T Act after the news conference, noting several of the provisions most maligned by the GOP have not yet taken effect.