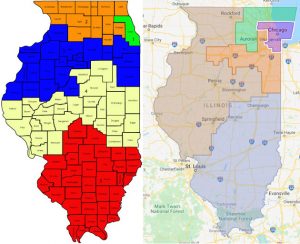 Lines for the Illinois Supreme Court districts have not been redrawn since they were first established in 1963.

There are seven Supreme Court justices from five districts across the state, with three justices elected from Cook County, which spans the 1st District.

The new boundaries are drawn using the Census Bureau’s American Community Survey data because the pandemic has delayed the release of U.S. Census data until September.

Republicans in the General Assembly and several voting advocacy groups have spoken out against using the ACS data, which is less detailed than the U.S. Census data and uses sampling to estimate population changes.

Major population shifts since the 1960s in all five districts are a primary reason that Democrats are redrawing the boundaries this year.

“Illinois is a very different state than it was 60 years ago, and the voters of Illinois deserve to elect members to our state’s highest court that reflect their values,” Chicago Democratic Sen. Omar Aquino, chair of the Senate Redistricting Committee, said in a statement.

The Supreme Court shares district lines with the state’s appellate courts. The proposed map will not impact the tenure of the current appellate and Supreme Court justices, according to the statement, and all justices running for retention can do so in their current districts.

Shortly after the map was released, House and Senate Republicans criticized the map, claiming they had no input and that Democrats should wait for the Census data.

Sen. Jason Barickman, R-Bloomington, said he became aware of the new map when it was reported in the media on Tuesday afternoon.

“There’s been no public dialogue on this, or all of the hearings that have existed…And then we find out through a blog post that Democrats are now introducing Supreme Court maps. Again, it flies in the face of transparency,” he said during a news conference.

“I think that’s something that nationwide there’s a backlash against but of course that’s what the Democrats want to do,” she said.

The new map is more balanced in terms of creating smaller population disparities among the districts, said Kent Redfield, emeritus professor of political science at the University of Illinois at Springfield.

But, Redfield said, the new map is clearly designed from a partisan perspective.

“There is absolutely no question it is drawn for partisan purposes and reinforces the Democratic advantage for electing Supreme Court justices,” Redfield said.

The proposed map extends the 4th District, which currently runs across central Illinois from Kankakee County to the Quad Cities, to absorb counties within the current 2nd District and 3rd District, where former Justice Thomas Kilbride lost his retention election last November in an expensive campaign effort on both sides.

“It certainly appears to add a lot of Democratic leaning voters or competitive areas to the 3rd District and eliminates Republican leaning territories,” Redfield said.

He said Kilbride’s defeat at the ballot box last year was an impetus for Illinois Democrats to redraw the Supreme Court districts, in order to retain a Democratic majority. Currently, the court has a 4-3 Democratic majority. The three Republican justices hail from the 2nd, 4th and 5th Districts.

The 5th District, which currently spans more than 30 counties downstate, would gain Champaign County and Macon County, which were previously within the 4th District.

Redfield said the 4th and 5th Districts appear to look more competitive than they have in the last few contested elections, but it’s too soon to know how competitive they will be.

John Pastuovic, president of the Illinois Civil Justice League, said in a statement he agreed that the new maps were drawn out of concern about the 3rd District.

“Additionally, the new 2nd District is a 50-50 toss-up using the same voting data,” he added. “Since the Democrats only have to win one of those seats to maintain their majority on the court, Las Vegas would probably like their odds.”