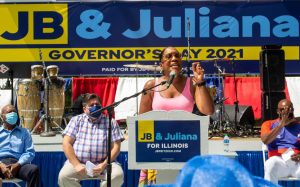 Lt. Gov. Juliana Stratton delivers a speech on the Director’s Lawn at the Illinois State Fairgrounds on Governor’s Day at the Fair on Wednesday, Aug. 18. The gathering of Democrats is largely viewed as the unofficial kickoff of campaign season in Springfield. (Capitol News Illinois photo by Jerry Nowicki)

SPRINGFIELD – Ten months before Illinois’ 2022 primary elections, Democrats from across the state descended on the capital city for the annual political events that coincide with the Illinois State Fair as an election kickoff.

“We Democrats understand what’s at stake – government leadership in crisis. Decisive leadership. Roll-up-your-sleeves leadership. …” said Kristina Zahorik, IDCCA president, at the brunch on Wednesday, Aug. 18. “That’s what Illinoisans want, and that’s what we do as Democrats in electing our leaders. … So whatever you may read in the press, Democrats in Illinois are united. There’s too much at stake to be divided.”

Democratic unity was in question in the lead-up to the first major party event organized under the new Democratic Party of Illinois Chair, U.S. Rep. Robin Kelly, a U.S. Congresswoman, from suburban Matteson.

Pritzker decided earlier this month that he would skip the IDCCA brunch, which was originally planned for the indoor ballroom of the Crowne Plaza hotel in Springfield, due to concerns about the COVID-19 pandemic.

But when the event was moved outdoors, Pritzker still didn’t attend, citing private family plans he made in the meantime. Instead, he recorded a brief video message which followed closely to his remarks made less than two hours later and 10 miles away at the Governor’s Day event at the Illinois State Fair. 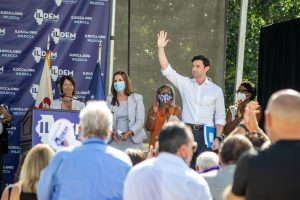 U.S. Sen. Jon Ossoff, D-Georgia, was the guest speaker at the Illinois Democratic County Chairs’ Association brunch in Springfield on Wednesday, Aug. 18. The event was held outdoors this year due to concerns about the COVID-19 pandemic. (Capitol News Illinois photo by Jerry Nowicki)

“There’s some people who try to write that people are boycotting or not going to something because they don’t want to, they don’t want to be there,” Pritzker said when asked about the brunch at the Governor’s Day rally. “The truth is that we’re all very busy. As you know, every day I’ve had about 10 events that I’ve had to attend, whether it’s here in the state fair or back up in Chicago, so I try to get to everything that I can. And I support every Democrat that was at the IDCCA event.”

Pritzker said he will continue to contribute to Democrats up and down the ballot through his Blue Wave Illinois advertising campaign which he launched in 2018 and has supported with millions of dollars of his own personal fortune since.

Kelly and Pritzker have both maintained they have a good relationship, and Pritzker said the Blue Wave Illinois effort is just one of several campaign funds used by Democrats to support down-ballot races.

But questions still surround the DPI’s fundraising structure because Kelly, as a sitting congresswoman, is prohibited from raising or distributing “soft money,” which includes money spent on state and local elections. That’s according to a ruling by the Federal Elections Commission.

On Tuesday night, Aug. 17, the DPI announced the formation of the Building Leadership, Unity, and Equity (BLUE) Illinois Committee, which is made up “entirely of non-federal office holders not appointed by the chair, and will be dedicated to managing the party’s non-federal account.”

Pritzker said Wednesday he hadn’t looked at the committee structure, and Senate President Don Harmon, D-Oak Park, and House Speaker Emanuel “Chris Welch,” D-Hillside, refused seats on it because of the complicated nature of the FEC’s ruling.

Neither Welch, who is out of state, nor Harmon, who is recovering from a mild breakthrough case of COVID-19, attended Tuesday’s events. Illinois’ U.S. Sen. Tammy Duckworth was also absent, participating through a recorded message like Pritzker.

For all the apparent discord about the high-level interworkings of the Democratic fundraising machine, members of the party were united in their messaging and rhetoric Wednesday.

The guest speaker at the IDCCA brunch this year was Democratic U.S. Sen. Jon Ossoff, of Georgia, who won a runoff election along with Rev. Raphael Warnock on Jan. 5 in that state to give Democrats a one-vote majority in the Senate, thanks to the tiebreaking role of Vice President Kamala Harris.

Kelly said that allowed Democrats to pass the American Rescue Plan Act to give aid to states and stimulus checks to average Americans without any Republican support.

“It wasn’t one Republican vote that sent the resources back to every state, even though they’re taking credit for it because their states and their towns and their mayors and governors are getting the resources too,” she said.

She credited Pritzker, Welch and Harmon for leading the state through the pandemic, and party voters who “make sure that Democrats are in the house on every level of government.”

Kelly, Ossoff and Illinois’ U.S. Sen. Dick Durbin contrasted the elation of turning the Senate for Democrats to the “shock” and “fear” of Jan. 6, when an angry mob of President Donald Trump’s supporters stormed the U.S. Capitol and stalled the certification vote of President Joe Biden.

“On Jan. 6, my wife Alicia was still working an overnight shift at Grady Hospital in Atlanta delivering babies, so I sat alone in my house watching the networks project our victories while a violent mob assaulted the U.S. Capitol and our Constitution,” Ossoff said. “And thank God. And thanks to the brave members of Congress on this stage, our Constitution survived.”

He touted the American Rescue Plan Act and a recently Senate-passed bipartisan infrastructure package as proof of the importance of reelecting Democrats.

While the national politicians touted the contrast to Trump, Illinois Democrats continued to point to the four years of government dysfunction under Rauner, including a two-year budget impasse which sent the state’s backlog of unpaid bills skyrocketing to more than $16 billion.

“Four years ago, Bruce Rauner and his Republican allies in the General Assembly were executing his assault on human services, his assault on unions, his anti-worker agenda, and we beat the hell out of him,” Pritzker said. “Now, because of Democrats, Illinois is finally moving in the right direction.”

Republican Day will take place Thursday, Aug. 19 at the Fairgrounds.