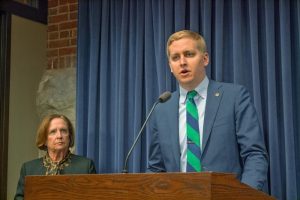 State Rep. Tom Demmer of Dixon is considering a run for statewide office in 2022. Whether for governor, U.S. Senate or another position, he has not decided.

The 34-year-old Illinois House Deputy Minority Leader has most recently been in the news as the leading Republican on the House Special Investigating Committee of Democratic Speaker Michael Madigan. He’s also one of the House Republicans’ lead negotiators on the state budget and Medicaid legislation.

Demmer said in a recent interview with Capitol News Illinois that he began contemplating a statewide run after discussions with colleagues on some of the “longer running issues” facing Illinois, including public corruption and seemingly never-ending budget pressures. Those issues, he said, have sewn distrust in government that he believes can be remedied through bipartisan problem solving and coalition building.

“You have to prioritize that idea that we need to restore trust in government, that we need to turn a page from the ludicrous run of scandals that have been part of Springfield culture my entire life,” Demmer said. “And which, every single day, frustrate and make the people of Illinois become more and more disenchanted that their government is actually working for them.”

He specifically cited the dual role of Madigan as House speaker for all but two of the past 37 years and, for two decades, as head of the state’s Democratic Party. Madigan was named as “Public Official A” this year in a deferred prosecution agreement in which utility giant Commonwealth Edison admitted to a bribery scheme aimed at influencing the speaker.

In the November elections, Republicans successfully deployed Madigan’s name and image in advertising on a wide scale, pummeling Democratic candidates for direct or tenuous ties to the speaker. Distrust in state level politicians was also a theme used to defeat a graduated income tax constitutional amendment, a key priority of Gov. J.B. Pritzker.

Madigan has not been charged and denies wrongdoing, but that did not make the ads any less potent, and the number of high-profile Democrats and members of Madigan’s caucus seeking his ouster is growing. Republicans hope the weakening of the speaker brings broader change.

Demmer, who works as director of innovation and strategy at Katherine Shaw Bethea Hospital which has locations in Lee and Ogle counties, touts his experiences with making deals in the General Assembly. He also touts a “common man” upbringing as the son of a public school teacher whose mother founded the Home of Hope Cancer Wellness Center after his father’s death from brain cancer.

“I think that Illinois needs representation from average citizens across Illinois,” he said when asked what lessons could be learned from the four-year term of Republican ex-Gov. Bruce Rauner. “That we need to have representatives of the House and Senate and executive branch offices who really understand what it means to live and work and raise a family in Illinois.”

He has represented the 90th District since 2013, which includes parts of Ogle, LaSalle, DeKalb and Lee counties. Prior to that, he was elected at 23 years old to the county board in Lee County, where he resides with his wife and daughter.

Demmer has criticized the governor for what he believes is a lack of bipartisan will, citing quick, partisan approval of a minimum wage hike in Pritzker’s earliest days in office, as well as a “unilateral” response to the pandemic.

But some of the bipartisan proposals Demmer promotes as his own wins became law with Pritzker’s signature.

Among them were a series of jobs-focused measures which were included in a budget and capital infrastructure package which came together in the eleventh hour of Pritzker’s first year as governor in 2019.

Those include the Blue Collar Jobs Act, which offsets some portion of labor costs of large-scale industrial projects, a phased-in repeal of the state’s franchise tax and added incentives for bringing data centers to Illinois. That helped spur Facebook’s announcement this year of an $800 million data storage facility planned for DeKalb.

Still, while Pritzker and Republican and Democratic leaders alike praised the 2019 budget and Rebuild Illinois capital infrastructure plan after their bipartisan passage, Demmer said he believes bipartisanship is the “exception to the rule” when it comes to the governor. That’s despite the fact Pritzker had supportive supermajorities in each chamber in his first year, meaning legislation could be passed without Republican support.

He pointed to Pritzker’s pandemic response, which has included limited legislative action from lawmakers in Springfield. The governor has said, however, that he would prefer if lawmakers did meet and take further action on pandemic-related measures.

Lawmakers met briefly in May to pass mail-in voting expansion and other limited-scope pandemic-related measures, as well as a budget which included a $3.9 billion deficit which moved forward on partisan lines. Other than that, Democratic leaders have canceled session, citing health concerns, and Pritzker has not used his authority to call a special session.

Demmer said the lack of involvement of legislators in response to the pandemic adds another layer of distrust to state government. While Pritzker frequently cites ongoing discussion with Republicans, Demmer said the role of the General Assembly is to meet deliberatively, not to serve as “consultants” in private calls to the governor.

“The result of that is that many people around the state of Illinois feel like their voice hasn’t been heard,” he said. “They feel like their community hasn’t been taken into consideration. And it’s harmed the ability for local officials to implement and enforce these executive orders. And it’s also harmed the general public’s ability to trust, and comply with those decisions.”

Pritzker – who in December announced more than $700 million in budget cuts to address the anticipated $3.9 billion deficit in the budget he signed — has criticized Republicans for opposing his budget proposals without offering alternatives.

Demmer and fellow Republicans in May opposed the governor’s budget, saying it was based on “hypothetical revenues” created by the graduated income tax, which failed, and a federal stimulus package for states that has stalled in Congress. But when asked if Republicans should propose a list of budget cuts going into negotiations, Demmer said that’s not his preferred way of negotiating.

The state should first adopt a realistic revenue estimate and host appropriations hearings throughout the session to plan on spending the anticipated revenue, he said, instead of adopting a revenue estimate to accommodate spending at the end of a legislative session. It’s customary in Springfield that budgets are negotiated by nonpublic working groups then brought to rank-and-file lawmakers in the waning hours of session with limited time for review.

Demmer and Pritzker have also agreed that Madigan should have testified before the legislative committee launched by Republicans to investigate his ComEd ties. Democrats dissolved the committee this week, asserting that it was called for political purposes.

Asked if his intent to run for statewide office gives credence to the claim that the committee was called to advance Republican members’ visibility, Demmer pointed to the seriousness of the allegations.

“Given the facts that are laid out in federal court, I would be shocked if that happened in any state if there wasn’t an investigation into the only public official who’s identified in the court filings and one who was at the very center of an incredibly comprehensive scheme that was admitted to by a public utility,” he said.

For a statewide run, Demmer would have the support of House Minority Leader Jim Durkin, of Western Springs.

“Tom, I think, fits the profile of what the Republican Party needs to put forward in this next election cycle,” Durkin said in a phone call this week, praising Demmer’s budget skills and ability to distill the complicated document into “common language.”

Durkin also touched on divisions within the Republican Party – often visible within the House Republican caucus – and what he believes is Demmer’s ability to bridge them.

“Tom believes in Republican principles, but he’s also a person who believes that we can resolve differences that we have to improve the state,” he said. “So that’s what a great majority of people are looking for – people want results. They want leaders that are going to be collaborative. They’re looking for leaders to get things done.”

Jeffrey Brincat – a political donor who supported Rauner’s two campaigns, was appointed by the former governor to the Illinois Racing Board and served as finance chair on the campaigns of former U.S. Sen. Mark Kirk and former U.S. Rep. Bob Dold, both Republicans – said in a phone call this week he will also back Demmer.

“There’s a very commonsense, good judgment perspective a guy like Tom brings to Illinois politics,” Brincat said. “And I would argue that maybe that’s the sea change shift we need to make a government stop working for the powerful and well connected and make it work for Illinois again.”

The filing period for petitions to run in the March 2022 primaries is expected to be Nov. 22-29 of 2021, according to a spokesperson for the Illinois State Board of Elections. Established party candidates can begin passing petitions 90 days before the last day of filing, which would be Aug. 31, 2021.