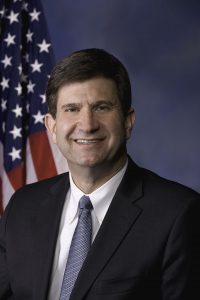 Brad Schneider, D-Deerfield, took his old seat back from U.S. Representative Bob Dold after losing it in 2015.

Illinois contributed one more Democrat to both the Senate and the House of Representatives, neither enough to take control from Republicans.

They fell short in a few key races, needing to gain five seats or four had Hillary Clinton won the election. Democrat Congresswoman Tammy Duckworth contributed to the number of blue Senate seats in her win over incumbent Mark Kirk. She highlighted the economy in her victory speech. “We need economic justice. We need jobs and we need investment in all of our communities,” she told a crowd in Chicago Tuesday night.

In his concession speech, Senator Kirk was upbeat about how he would provide an example of conciliatory politics. “This coming beer summit will show kids across Illinois that opponents can peacefully bury the hatchet,” he said.

U.S. Representative Bob Dold was unseated when ex-Cong. Brad Schneider, D-Deerfield, took his old seat back after losing it in 2015.