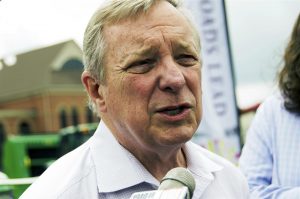 U.S. Sen. Dick Durbin talks to members of the media Aug. 13 during Ag Day at the Illinois State Fair in Springfield. Durbin this week accused the U.S. Department of Agriculture of playing favorites with trade war aid payments by giving more money to southern cotton farmers who were less affected by the trade war than Illinois soybean farmers. (Photo by Rebecca Anzel/ Capitol News Illinois)

“USDA has overcompensated southern cotton growers, whose market losses are small and whose prices have gone up, with more aid on a county-by-county basis than Illinois’ soybean farmers,” Durbin said in a statement Feb. 10.

Durbin, a Democrat who sits on the Senate agriculture committee, made the accusation after the USDA last week distributed the third and final round of aid payments to farmers affected by the ongoing trade war with China.

The $14.5 billion of payments came from an aid package called the Market Facilitation Program, which aimed to cushion the blow of international trade disputes on farm income.

“Under President Trump, farmers last year received 40 percent of their income from the government,” Durbin said, referring to the $33 billion of trade aid, disaster assistance and Farm Bill subsidies that have kept farmers afloat.

A report published by Democrats on the agriculture committee, which analyzed the first round of payments, showed that southern cotton farmers received more money per acre than Midwest soybean farmers who were harder hit.

First-round payments in Illinois averaged $69 per acre, with the highest county, Piatt, at $87. In contrast, 163 counties in those five southern states saw payments above $87 per acre, including 13 that saw the maximum $150 per acre.

The National Cotton Council argues that the average per-acre cotton payment of $99 represents “just 42 percent of the lost market value” from the trade war.

Soybeans, however, were much harder hit by the trade war. Soybean exports fell by $9 billion, a drop of 75 percent, compared to cotton exports which fell just 6 percent, a decrease of $54 million.

“Payment rates have not aligned to help the regions and crops harmed the most,” the agriculture committee’s report said.

Aid payments overall paint a different picture, though, according to USDA figures. After the first two rounds, the top five states receiving money for non-specialty crops, which include soybeans and cotton, were Iowa, Illinois, Texas, Kansas and Minnesota.

“While Senator Durbin may point to higher per acre rates in some portions of the Southeast,” said a USDA spokesperson, “it’s important to remember that Illinois farmers received more from the Market Facilitation Program at nearly $1.45 billion than all farmers in the top four cotton producing states in the Southeast.”

Adding to Durbin’s frustration is that Illinois soybean production last year fell 20 percent because of record precipitation during the spring planting season.

“Our farmers are coming off one of the toughest years in memory and the USDA’s formula for trade aid payments adds insult to injury,” he said.

U.S. Secretary of Agriculture Sonny Perdue is a native of Georgia, serving as the state’s governor from 2003 to 2011 before being nominated by President Donald Trump in 2017. The five southern states ahead of Illinois also voted for Trump in 2016, while Illinois did not.

To be eligible for the last round of trade war aid, non-specialty crop acreage had to have been planted by Aug. 1. The maximum amount of total crop aid one farmer could receive across the three rounds of payments was $250,000.

Last month, U.S. and Chinese officials agreed to the first phase of a trade deal that will see Beijing increase its imports of American agriculture products by $32 billion. China, though, is expected to delay some purchases as the Wuhan coronavirus outbreak takes a toll on the country’s economy and thus its ability to purchase international goods.

The trade war is technically still active because President Trump says he will not lift U.S. tariffs until phase two is negotiated.