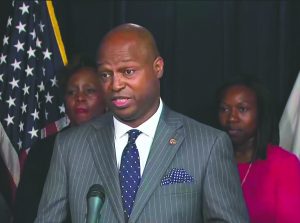 Rep. Emanuel “Chris” Welch speaks during a news conference Tuesday in Chicago urging passage of a bill he is sponsoring to require publicly-traded corporations headquartered in Illinois to have at least one African-American and one woman on their boards of directors. (Credit: BlueRoomStream)

SPRINGFIELD — State Rep. Emanuel “Chris” Welch urged the Illinois Senate on Tuesday to act quickly on his bill that would require all publicly-traded corporations headquartered in Illinois to have at least one African-American and one woman on their boards of directors.

Speaking at a news conference in Chicago live-streamed online, Welch stood with several high-profile black and female business leaders and said, “We support House Bill 3394 because it’s our time and it’s our turn.”

“Open the door. Let us in. Give us our seat at the table,” he said.

The bill passed out of the House on March 29 with 61 votes, only one vote more than the minimum 60 votes needed for passage.

That vote came after a rancorous debate on the House floor during which some Republicans accused supporters of the bill of being extremists.

“This is blowing my mind,” Rep. Tony McCombie, a Savanna Republican, said during the debate. “You guys are going to put your governor, our governor, on the books for being the biggest business-busting person in the nation.”

“This is a horrible bill,” she continued. “I don’t even — you guys have got to get it together here. I don’t – no offense, this is something else.”

“Offense is already taken,” replied Rep. William Davis, a Democrat from the Chicago suburb of Homewood, who often sponsors legislation calling for diversity in state contracting and purchasing.

“We wouldn’t have to do these kinds of things if folks would just act right,” he said.

Davis challenged the assertion that being required to have at least one African-American and one woman on a board would stifle business growth in Illinois.

“So what, do you all want us to pack up and leave so it can be better? Is that what you’re suggesting? There’s no reason why this is a bad bill,” he said.

That prompted Rep. Steven Reick, a Woodstock Republican, to respond.

“Offense is taken when no offense is meant,” he said. “But I’ll tell you what. If what you’re going to do is demand this kind of thing, you’re putting up an ‘Illinois is not open for business’ sign in this state. I don’t care whether you are offended or not by the fact that we are against this bill. The fact remains that you’re not going to get anything in this country in the way of being treated equally if you’re going to take offense at every damn thing that comes up.”

When lawmakers returned to the Statehouse the following Tuesday, Reick publicly apologized for that comment.

Only one Republican, Rep. Margo McDermed, of Mokena, voted in favor of the bill, while 27 Republicans voted against it. Four Democrats and three Republicans were recorded as not voting and several other House members were listed as absent.

During Tuesday’s news conference, Welch and others disputed the argument that a requirement for racial and gender diversity on corporate boards would be bad for business.

“Investing in companies that support gender and racial equity isn’t just the right thing to do, but it makes the most financial sense,” Chicago City Treasurer Kurt Summers said, citing an analysis by the business consulting firm McKinsey and Company. “Companies in the top quartile for racial and ethnic diversity are 35 percent more likely to have financial returns above their respective industry and sector medians.”

The bill is pending in the Senate, where Sen. Christopher Belt, a Cahokia Democrat, is its chief sponsor.