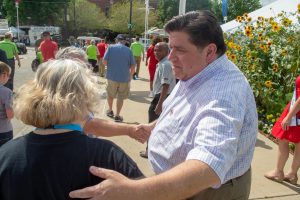 SPRINGFIELD — It is unclear what effect the decision by Illinois’ three family planning organizations to decline millions of federal grant dollars will have on associated clinics in the state.

The U.S. Department of Health and Human Services oversees the Title X program, which provides preventative reproductive health care services — exams, birth control and testing for sexually transmitted diseases, to name a few — to those who could otherwise not afford it.

A court in California recently allowed the department to implement new regulations clarifying Republican President Donald Trump’s administration’s position that taxpayer money cannot be used in any way to “perform, promote, or support” abortion procedures, according to the rule.

Democratic Gov. J.B. Pritzker called the regulations “fundamentally wrong” and “an extraordinarily harmful approach” to health care in a press call Monday hosted by Planned Parenthood Federation of America. In July, he instructed the Illinois Department of Public Health to forgo the remaining $3.75 million the agency had been slated to receive in family planning grant funding.

Planned Parenthood of Illinois is also refusing its grant of $3.5 million due to the updated rules. It joins all other Planned Parenthood providers across the country, which announced Monday they were withdrawing from the Title X program.

“Let me be clear: Illinois stands with Planned Parenthood, … and in Illinois, we have not and will not support this ‘gag rule,’” Pritzker said Monday. “We will make sure that access to these services remains available. …”

The governor’s office told Capitol News Illinois at the end of July the state will offset the loss of federal funds by reallocating money to the programs from the Public Health Department’s fiscal year 2020 appropriation.

To do this, the state will pay $2.4 million to the 28 grantees directly managed by the department, which will affect 72 clinics.

The remaining $1.35 million, about 34 percent, will be spent on administration costs, including personnel, travel expenses and educational materials, according to a department spokesperson.

The family planning centers overseen by the state, therefore, are unlikely to experience disruption due to loss of federal dollars, the spokesperson said in an email.

“At this time, funding for services provided by IDPH delegate agencies will not be impacted,” she said.

While the state is making up the money lost by the federal government for the programs it directly manages, it is unclear whether Illinois’ other two Title X grantees have secured a lasting source of money to compensate for the federal grants they declined.

The state’s Planned Parenthood affiliate is using “emergency funds” to supplement the money it is not accepting from the federal government. A spokesperson told Capitol News Illinois last month that in the short term, its clinics will continue operations at their normal capacity, “but not for the long term.”

“Private philanthropy is not a long-term solution for our patients or the millions of other patients across the country who will lose access to Title X supported services,” Brigid Leahy, senior director of public policy for Planned Parenthood of Illinois, said in an email.

In an interview with National Public Radio’s WBEZ, Jennifer Welch, the state’s Planned Parenthood president and CEO, said her group is in conversations with the governor’s administration “about how best to serve all of the patients in Illinois.”

“We look forward to working with Governor Pritzker to ensure that quality care can continue at every former Title X site,” Leahy added.

It is unclear whether Aunt Martha’s has a plan to compensate for the loss of federal family planning funds.  A spokesperson did not respond to multiple requests for comment.

“As the state and our health care partners grapple with the implementation of the Trump Administration’s unethical rule, the Pritzker Administration will work closely with partners to ensure access to care is not interrupted,” Jordan Abudayyeh, the governor’s spokesperson, said in an email. “The ultimate goal here is to prevent this rule from being in place for the long term either through litigation or a change in law.”

Pritzker wants the U.S. Congress to act because, he said Monday, “an attack of this magnitude clearly calls for a federal solution.” But his administration also plans to continue its fight against the U.S. Department of Health and Human Services’ Title X regulations in court.

Attorney General Kwame Raoul joined a lawsuit with 21 other states’ chief lawyers challenging the constitutionality of those new rules. Abudayyeh said the governor’s administration is “working closely” with Raoul to “review next steps.”

Another potential lasting effect of the forgoing family planning grants is the potential loss of eligibility for a federal drug pricing program, which allows safety net clinics to buy medication directly from manufacturers and wholesalers at discounted prices.

According to federal data, there are 1,423 health facilities that are members of the drug pricing program in Illinois. Of those, 68 are Title X grantees, and any change in their Title X designation could render them ineligible for the program if they are not also designated as another type of safety net provider.

While Leahy told Capitol News Illinois none of Planned Parenthood’s clinics will be affected, spokespersons for the Department of Public Health and Aunt Martha’s did not respond to questions as to how their organizations might be impacted.