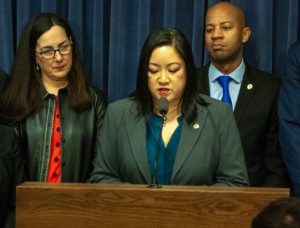 Rep. Theresa Mah, D-Chicago, speaks during a Progressive Caucus news conference April 11 at the Capitol in Springfield. On Friday, July 31, Mah and other leaders urged Asian-Americans to participate in the 2020 U.S. Census. She said the 2010 Census “was really important in helping us draw the boundaries for our current district to empower Asian-Americans in this area and give them a voice in state government.” (Capitol News Illinois file photo by Jerry Nowicki)

SPRINGFIELD – Elected officials in Illinois who make up the Asian-American Caucus, along with local community organizations, held Asian-American Census Day on Friday to promote participation in the census among Asian Illinoisans.

During a Friday, July 31 news conference in Chicago’s Chinatown Square, Rep. Theresa Mah, D-Chicago, spoke about how the census has benefited the Asian community and why taking part is important.

“Ten years ago, the population that I represent was split into four different state representative districts, effectively giving them no power or say,” Mah said. “The census was really important in helping us draw the boundaries for our current district to empower Asian-Americans in this area and give them a voice in state government.”

Before the 2010 census, no Asian-Americans held a statewide elected position in Illinois. In 2016, Illinois elected Asian-Americans to federal, state and county governments simultaneously for the first time. That election also sent Mah to the General Assembly as the first Asian-American to do so, representing a portion of Chicago that includes Chinatown.

Outside of elected representation, speakers at Asian-American Census Day pointed to Chinese language, Hindi, Korean, Urdu and Arabic ballots and registration forms as examples of access to the legislative process Asian-Americans received due to the census.

The state’s self-response rate for the 2020 census stands at 67.5 percent which is lower than 2010’s response rate of 70.5 percent. While the Illinois response rate is higher than the national average, the chance of losing federal funding and representation in the U.S. House of Representatives as a result of residents being undercounted looms large. Outreach normally done by community groups has been complicated by the coronavirus pandemic.

Grace Chan McKibben, executive director of Coalition for a Better Chinese American Community, says her organization and others have been “working creatively” to reach out to the community – “through phone, Chinese and mainstream media and social media, word of mouth, sharing information through community organizations and businesses to ensure that everyone is counted,” McKibben said.

“I hope everyone can join us to make one last push before the Census Bureau’s enumerators begin their work in August.”

That work, which involves the Census Bureau sending door knockers to unresponsive homes, may not be as helpful for preventing undercounting as previously expected. The Trump administration has shortened the deadline for door knocking, which is expected to start Aug, 11, from Oct. 31 to Sept. 30, according to a recent report by NPR.