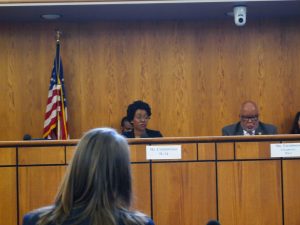 U.S. Rep Lauren Underwood (D-14th), vice chairman of the House Committee on Homeland Security, listens to testimony during the field hearing. Next to Underwood is U.S. Rep. Bennie Thompson of Mississippi, chairman of the panel. (Photo by Kevin Beese/Chronicle Media)

Foreign influences in the 2020 elections are far more likely to come from the spread of misinformation than attempts to hack in and doctor vote totals, according to state and national election security experts.

Misinformation such as saying the election has been postponed or that Democrats vote on one day while Republican vote on another day is the kind of stuff that could be put on social media avenues by foreign countries looking to keep certain segments of the U.S. population from the polls, according to experts who testified at an Oct. 15 congressional field hearing in Lake County.

Matthew Masterson, senior cybersecurity adviser for the Cybersecurity and Infrastructure Security Agency of the Department of Homeland Security, said that foreign adversaries will target American elections in 2020 and beyond.

“The attempts by adversaries to undermine confidence in our democratic institutions as a whole is an ongoing and robust effort,” Masterson said.

Residents being questioning and not taking unbelievable information as truth is vital to keeping our elections fair and honest, Steve Sandvoss, executive director of the Illinois State Board of Elections, said.

“If it raises a red flag, if it doesn’t make sense, if it just seems not right, we’re going to encourage people to report it,” Sandvoss said. “If you see something, say something.”

Sandvoss said it still hasn’t been worked out if people finding such misinformation will report it to the State Board of Elections or the media platform itself.

“The integrity of our elections is essential to the preservation of our republic; and it is our patriotic duty as Americans, and my sacred duty as someone elected to represent this community, to ensure our elections are free from foreign interference,” Underwood, a Democrat from Naperville, said.

Sandvoss said the 2020 misinformation campaigns will likely be aimed at making people think their vote could be hijacked so that they don’t bother to vote. The State Board of Elections executive director said nothing could be farther from the truth.

“Your vote is going to count,” Sandvoss said. “I think that needs to be pressed upon the general electorate so they don’t lose confidence in the integrity of the election.” 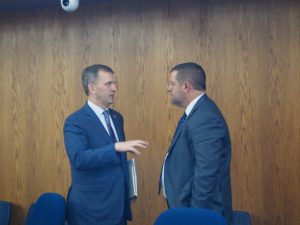 U.S. Rep. Bennie Thompson (D-Mississippi), chairman of the House Committee on Homeland Security, said Congress needs to come up with standards that every voting machine in the country must meet in terms of election security.

“We want to make sure our system of electing our leaders is as honest and accurate as possible,” Thompson said.

Underwood noted that U.S. intelligence officials have confirmed there was foreign interference in the 2016 elections. In Illinois, she said, it resulted in foreign actors accessing the records of 76,000 Illinois voters.

“Since then, state and local election officials have been working hard to improve election systems and infrastructure, but due to limited resources, some have faced challenges to upgrading legacy machines and additional hiring of cybersecurity personnel,” Underwood said.

Lake County Clerk Robin O’Connor said that the 458,000 registered voters in her county can rest assured that nearly constant monitoring is keeping their voting information safe.

Even though Illinois is ahead of the game on election security, according to experts, many voting machines in the state are outdated. Elizabeth Howard, counsel for the Democracy Program for the Brennan Center for Justice, said the state realistically needs $175 million to replace its outdated election equipment.

“Despite the progress, there is much to do in Illinois and throughout the country,” Howard said. “In Illinois, most of the voting equipment is antiquated and many of the machines do not use paper ballots. These machines need to be replaced immediately.”

Howard estimated that replacing all the antiquated voting machines in the country and putting other election security measures in place would cost $2.2 billion. Just replacing the old machines, Howard said, would cost $750 million.

That $2.2 billion estimate also includes $100 million for voting results audits over the next five years and $500 million for voter registration infrastructure improvements, according to Howard.