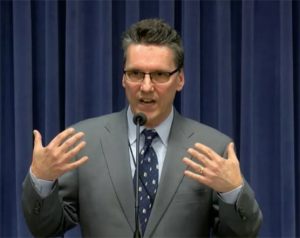 Illinois State Board of Elections Public Information Officer Matt Dietrich speaks during a news conference in 2018. On Thursday, Dietrich said three of the 15 people who voted in 2018-19 despite identifying themselves as non-citizens during automatic voter registration are in fact U.S. citizens. (BlueRoomStream.com)

SPRINGFIELD — Only 15 people who self-identified as not being U.S. citizens cast ballots in the 2018 and 2019 elections, the Illinois State Board of Elections said in a correction Thursday, Jan. 23, three of which actually turned out to be citizens.

Spokesperson Matt Dietrich had initially reported that 16 possible non-citizens had voted. In a clarification Thursday, he said one of the voters had voted in two different elections and was inadvertently counted as two voters.

Those people were able to vote due to a recently discovered programming error in Illinois’ new automatic voter registration system that automatically signs people up to vote when they apply for or renew their driver’s license. Officials in Secretary of State Jesse White’s office, which manages driver’s licenses, have accepted responsibility for the error and say the problem was immediately fixed.

That system, the result of 2017 legislation that passed both chambers of the General Assembly by unanimous, bipartisan votes, officially launched July 2, 2018. But the programming glitch that failed to filter out people who identified themselves as non-citizens wasn’t discovered until December 2019. By that time, 545 people who identified as being non-citizens were registered to vote.

The elections board has said consistently that some of those individuals may actually be citizens who accidentally checked the wrong box on their driver’s license applications.

“We continue to work with local election authorities to establish the voting eligibility status of the remaining individuals who voted and of all 545 individuals who were mistakenly registered during the AVR process,” Dietrich said in a statement Thursday.

Lawmakers on both sides of the aisle are now calling for legislative hearings to determine how the mistake happened and what is being done to make sure it is not repeated.

Rep. Emanuel “Chris” Welch, a Hillside Democrat who chairs the House Executive Committee, said he will hold hearings next week. Lawmakers will be back in Springfield on Tuesday, Jan. 28, for the start of the 2020 legislative session.