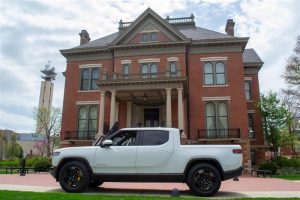 A Rivian all-electric R1T truck, manufactured in Normal, is pictured outside of the Governor’s Mansion April 27 in Springfield. The truck won the title of the “Coolest Thing Made in Illinois” at a contest held by the Illinois Manufacturers’ Association. (Capitol News Illinois photo by Jerry Nowicki)

That was the result of the third annual Makers Madness bracket-style tournament hosted by the Illinois Manufacturers’ Association which allows Illinoisans to vote for the “coolest” product made in the state.

This year’s winner was announced at the Governor’s Mansion Wednesday. The contest is sponsored by Comcast Business.

Manufactured in Normal, the R1T is the first electric truck in production that features four motors, eight driving modes and up to 400 miles of range on a single charge, combining off-road capabilities with the driving style of a sports car.

It can accelerate from zero to 60 in three seconds and has a towing capacity of up to 11,000 pounds.

“We are proud to call Illinois home and honored to accept this year’s award. So much credit goes to the plant team members who make the R1T every day and who made this accomplishment possible today,” Chen said.

Normal is home to the company’s first manufacturing campus where they build R1 products as well as commercial vans. They began production of the R1T in September 2021.

Over 400 products were submitted to this year’s Makers Madness competition with over 200,000 votes cast.

The all-electric truck bested a diverse group of challengers, including General Mills’ Fruit by the Foot snack, which is made in Belvidere.

Another product in the final four was the Orion Spacecraft Capsule’s Aft Bulkhead and Barrel and Tunnel which was made for deep-space travel missions planned by NASA. It is manufactured by Ingersoll Machine Tools Inc. in Rockford.

The other product in the finals, custom blazed diffraction gratings, allow for the creation of ultra-high line density and high precision patterning of surfaces, and are used in virtual reality headsets, semiconductor manufacturing and X-ray technology. Its manufacturer is Inprentus Precision Optics of Champaign.

Gov. JB Pritzker presented the award and said the company has established itself as a national leader in the EV industry and that he “couldn’t think of a more fitting winner” in the wake of a new state law that aims to put 1 million EVs on state roads.

Pritzker said the R1T is a “game-changer” in the auto industry and that through investments made in the Reimagining Electric Vehicles Act that incentivizes EV production in Illinois, the state can open more doors to “access 21st century manufacturing careers.”

In 2021, Pritzker signed the Reimagining Electric Vehicles Act into law, providing tax credits for manufacturers of EVs and their parts.

The tax credits range from 75 percent to 100 percent of income tax withheld for creating new jobs or 25 percent to 50 percent for retained employees and will depend on factors such as location and the number of employees hired. A 10 percent credit for training expenses would also be available.

In the Fiscal Year 2023 budget, REV credit eligibility was expanded to battery recyclers, hydrogen and solar powered vehicles, and makers of the products’ component parts.

The Climate and Equitable Jobs Act, or CEJA, set the goal of putting 1 million EVs on state roads by 2030.

In a news release posted in early April, Rivian said the company has produced 2,553 vehicles and delivered 1,227 vehicles in the first quarter of 2022 at the Normal manufacturing facility.

“The mission of sustainability through investment in zero-emissions transportation technology and economic growth is evident throughout our operations in Illinois,” Chen said.