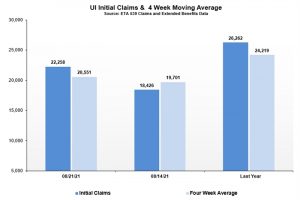 SPRINGFIELD – As federal unemployment benefits created in response to the COVID-19 pandemic are set to expire next week, Illinois continues to see high unemployment rates, although things have improved from one year ago.

Select Illinois Department of Employment Security offices, meanwhile, have opened for appointment-only in-person services for the first time since the pandemic led to a statewide stay-at-home order in March 2020, which has since expired.

Twenty-minute appointments will be available Monday through Friday between 8:30 a.m. and 5 p.m. Visitors will be afforded a 10-minute grace period, according to IDES.

The IDES website is also still open for claims, and callbacks with an expert can be scheduled by calling 800-244-5631. More offices will open in a “phased” approach in the coming days and weeks, according to IDES.

The number of nonfarm jobs increased in 13 of 14 metropolitan regions for the month of July compared to one year ago, according to preliminary data from IDES and the U.S. Bureau of Labor Statistics.

“Today’s data is reflective that reopening and recovery is touching every corner of the state,” Deputy Gov. Andy Manar said in a news release.  “With the expiration of federal unemployment programs in a week and a half, IDES is focused on matching jobseekers with employers to continue to assist with statewide economic recovery.”

For July, Illinois’ unemployment rate was 7.1 percent, trailing the U.S. as a whole, which was at 5.4 percent.

Added federal benefits, meanwhile, are set to expire on Sept. 11. That includes Pandemic Unemployment Assistance which went to independent contractors such as ride share drivers who are normally not eligible for assistance; Federal Pandemic Unemployment Compensation which offered an added $300 weekly payment; extended benefits beyond the weeks normally offered; and mixed benefits for those who were self-employed and also receiving a check from an employer.

Gov. J.B. Pritzker, meanwhile, extended the state’s stay on enforcement of residential evictions for “covered persons” who have lost income or faced greater expenses or hardships due to the COVID-19 pandemic.

That order, which is in effect until Sept. 18 when the latest 30-day disaster declaration expires, states “All state, county, and local law enforcement officers in the State of Illinois are instructed to cease enforcement of orders of eviction for residential premises entered against a Covered Person, unless that person has been found to pose a direct threat to the health and safety of other tenants or an immediate and severe risk to property.”

“Covered persons” must fill out, and landlords must make tenants aware of, a “declaration” form available through the Illinois Housing Development Authority certifying that they are covered under the executive order.

The new order added a section clarifying that nothing in the order “shall preclude a person or entity with a legal right to pursue an eviction” from challenging the truthfulness of a tenant’s declaration in court.

Rental help resources can be found at https://www.illinoisrentalassistance.org/providers.