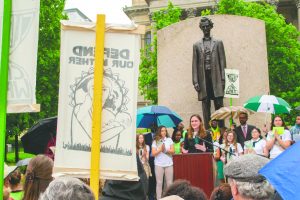 Representatives from the Illinois Clean Jobs Coalition rally outside the Illinois State Capitol on May 9 to urge action on the Clean Energy Jobs Act. Stakeholders will likely have to wait on energy reforms, however, as a list of other big-ticket items such as a state budget and marijuana legalization are of a higher priority in the Legislature. (Photo by Jerry Nowicki/Capitol News Illinois)

SPRINGFIELD — As the General Assembly moves toward its May 31 adjournment with issues such as a state budget, graduated income tax, and the legalization of sports gambling and recreational marijuana still to be decided, an ambitious package of energy market reforms will likely have to wait until the fall veto session or later before moving forward.

The expected delay comes despite calls for urgency from activists and energy interests from coal to nuclear and renewables. The ultimate goal of the stakeholders involved is to merge several energy-related bills into a comprehensive reform package that drives renewable energy production in Illinois.

“There’s a lot of shifting ground in the energy space right now in Illinois. But given all the complicated policy initiatives facing the Legislature right now, this session, I think it’s fair to say energy related concerns have been relegated to the back burner for now,” state Sen. Bill Cunningham said earlier this month.

Cunningham (D-Chicago) is the chair of the Senate’s energy committee and sponsor of Senate Bill 1781, dubbed the “Path to 100” act, aimed at moving the state toward 100 percent renewable energy by expanding on Illinois’ 2016 Future Energy Jobs Act, or FEJA.

Proponents of Path to 100 say FEJA helped create 1,300 renewable energy jobs in Illinois in 2018 alone, but more than 800 solar projects have been waitlisted because of funding shortfalls facing the state’s renewable energy program.

The FEJA-spurred renewable projects received funding from a pool of money generated by a fee of about 2 percent on residential ratepayer bills that is collected and distributed by the Illinois Power Agency.

Cunningham said the Path to 100 legislation would increase that rate cap slightly to create more renewable energy credits and drive further investment in renewable projects – ultimately, according to Cunningham, creating ratepayer savings in the future by eliminating the need for ongoing purchase of raw materials.

“It’s just a matter of balancing all those things out over a long-term energy policy in the state,” he said.

Cunningham said FEJA was aimed at getting Illinois to 25 percent renewable energy by 2025, but the state is at about 7 percent, and there’s not much room for growth without expanding the pool of renewable credits available.

Rep. Will Davis (D-Homewood) who is carrying the bill (House Bill 2966) in the House, said he is ready to move the legislation forward at any time, but in light of a long list of important legislation still to be addressed in the next 10 days, he’s not expecting to do so before adjournment.

Williams said the goal of her legislation is a carbon-free energy sector – which would still allow for nuclear energy production – by 2030 and a 100 percent renewable sector by 2050.

The bill also aims to “promote equity, jobs and economic opportunity for all communities in Illinois” with a focus on areas affected by coal pollution, Williams said. This would be accomplished through workforce training programs and the implementation of Clean Jobs Workforce Hubs.

“The idea will be there will be hubs in communities where coal plants shut down,” she said. “We’re hoping to plan for the retirement of these coal plants, make deliberate decisions about how they close and how communities can benefit despite that.”

Williams said her bill would increase investment in carbon-free and renewable energy by putting the authority for procuring energy capacity for northern Illinois in the hands of the state, rather than federal markets.

When capacity is purchased, the product is not the energy itself, but the guarantee the grid can output necessary energy wattage to satisfy consumer needs three years into the future.

Northern Illinois is part of the federally-regulated PJM grid which purchases capacity from generators in 13 states and Washington, D.C., at an auction every year. Williams’ bill would leave Illinois in the PJM grid, while removing the state from the capacity auction process, giving the Illinois Power Agency the authority to purchase capacity.

Nuclear energy provider Exelon is backing its own capacity market reforms as well (House Bill 2861 and Senate Bill 660), which it expects to be included in a final energy package in some form.

While Exelon still says passage of capacity reform is urgently needed, representatives of the energy provider acknowledged last week they would likely have to wait until at least the fall for their favored legislation to pass.

Meanwhile, a pair of fossil fuel companies have backed their own bills in the energy reform race. Senate Bill 135, backed by NRG Energy which operates coal plants in Illinois, would allow companies to receive clean energy credits for closed fossil fuel plants; and House Bill 2713, which is backed by coal plant operator Vistra Energy, is aimed at transitioning closing coal plants into solar and energy storage sites.

Cunningham said it’s important to include all interests in discussions due to the disruptive nature of the reforms and the scope of communities that will be impacted.