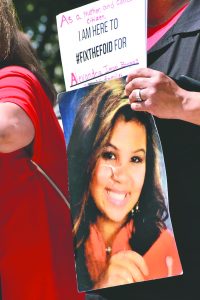 Rafael Burgos holds a photo of his daughter, Alexandria, who was killed by a stray bullet in 2014 in Chicago. Rafael and his wife, Milagros, were attending a rally Wednesday at the Capitol in Springfield to support legislation that would toughen the state’s gun licensing processes. (Photo by Lindsey Salvatelli/Capitol News Illinois)

SPRINGFIELD — Lawmakers and supporters of a bill that would strengthen the Firearm Owners Identification card system chanted “Fix the FOID” in front of the statue of Abraham Lincoln outside the Capitol on Wednesday, May 22.

Speakers like Milagros Burgos told their stories of loved ones who’ve died because of gun violence. Burgos’ husband, Rafael, stood next to his wife, holding a photo of their daughter, Alexandria.

Burgos’ voice cracked as she spoke to a group from a podium about her daughter. Alexandria was a college student who was killed by a stray bullet in 2014 in Chicago when she was 18.

Burgos said Alexandria had no idea what a gun looked like, or what it sounded like when fired.

“Enough guns, enough lives taken away from families, enough gun violence,” Burgos said. “… We cannot get loved ones back, but we can make a difference, together.”

Alicia Schemel with Moms Demand Action said legislation like Senate Bill 1966 would have prevented the death of her father, who was shot while on his way to pick her up from work.

“I know many of you have stories about tragedies that have hit your family and friends,” said Democratic Rep. Kathleen Willis, of Addison. “We’re going to make sure we have less and less of those stories.”

If passed, the bill sponsored by Willis would overhaul the state’s FOID system.

It would increase renewal and licensing fees from $10 to $50, require a-one-time fingerprint, better define clear and present danger, and prioritize those who fall within that definition for license revocation.

When pressed on her position of mandated fingerprinting during a House Judiciary Committee hearing on Tuesday, Willis said she supports the measure if it means keeping people safe. 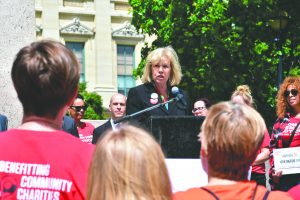 Sen. Julie Morrison, D- Deerfield, tells rally-goers to keep pressure on their elected officials to support a bill that would strengthen the state’s gun licensing and renewal processes during a rally Wednesday at the Capitol in Springfield. (Photo by Lindsey Salvatelli/Capitol News Illinois)

“We want to make sure we keep this state as safe as possible, allowing people who are lawful gun owners to own them in a safe manner,” Willis said during the rally.

Cindy McMullan, who attended the rally and is a member of Moms Demand Action, said she made the trip from Columbia, Illinois, because she wants to see sensible gun laws in the state.

She said she’s not opposed to lawful gun possession and the measures she supports – such as preventing domestic violence abusers or convicted felons from legally owning firearms – are also supported by gun owners. The current system, she said, “obviously has weaknesses” that put her family at risk.

Sen. Julie Morrison, D-Deerfield, the bill’s chief sponsor in the Senate, said SB1966 is a necessary change to policy and practices that will save lives. She also told the crowd to not accept “no” as an answer when requesting other lawmakers to support the bill.

“This is your state, this is our communities, and this is our problem we’re trying to fix together,” Morrison said. “You elected these people. They need to listen to you.”

SPRINGFIELD – Illinoisans soon may have to be fingerprinted and pay an increased fee to be a licensed gun owner in the state.

In the wake of a shooting at an Aurora workplace in February that left five people dead, lawmakers have debated how to better track Firearm Owners Identification Card holders who have had their license revoked. 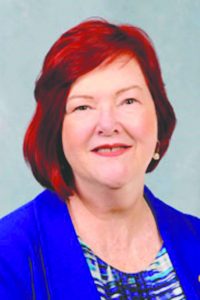 Senate Bill 1966 was advanced to the full House on May 21 by the House Judiciary Committee on a vote along party lines. Sponsored by Rep. Kathleen Willis (D-Addison) an amendment to the bill would require new FOID card holders and those renewing their license to submit to a fingerprint. It also would increase application fees from $10 to $50, and reduce the time a license is valid from 10 years to 5 years.

Willis said the purpose of the bill is to “keep up” with FOID revocations and create better communication between local and state law enforcement agencies.

“One of the reasons that we saw that revocations were not followed up as best as they could was because there was no money in resources to be able to do that,” Willis said.

State Police Lt. John Thompson testified May 21 about the challenges his agency faces with the limited funds it receives for FOID revocation enforcement.

He said the fee of $10 for 10 years isn’t enough to sustain the nearly 1,000 applications the department receives daily.

“We’re running a very, very basic operation, and it’s not what’s expected of us and we need to do better,” Thompson said.

Ed Sullivan, on behalf of the Illinois State Rifle Association, said fees required for concealed-carry permits have amounted to $78 million over 10 years.

“So tell me, please, somebody, where’s the lack of money?” Sullivan asked.

Sullivan said what happened in Aurora was a “systematic failure of government” that could have been avoided if the shooter’s FOID card had been taken, and added that the bill being presented does little to address those failures.

The problem, Sullivan said, “is not going and taking FOID cards from people who shouldn’t have them.”

Rep. Terri Bryant (R-Murphysboro) the committee’s Republican spokesperson, said she would never vote for a law that mandates fingerprints for any constitutional right.

Rep. Arthur Turner (D-Chicago) said he was fine with everything in the bill and supports “sensible gun laws,” but believes the increased FOID card costs would be a burden to those in poorer communities.

“If I have to pay hundreds of dollars, potentially, to have a FOID card, I’m worried that you’re going to price out certain communities that can’t afford to pay that,” Turner said. “ … You could make a criminal out a person who’s already a FOID card holder that didn’t get it renewed because they couldn’t afford it at the time.”