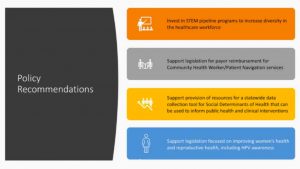 Policy recommendations from the presentation of Drs. Vida Henderson and Karriem Watson of the University of Illinois Cancer Center.

That testimony was given during a joint hearing of the Senate Health and Human Services and Public Health committees prompted by the Illinois Legislative Black Caucus, which has highlighted health care disparities in the past.

Legislators, in the Nov. 9 hearing and in past hearings, have referenced significantly higher maternal mortality rates, higher infant mortality rates, and higher rates of COVID-19 positivity and COVID-related deaths among Blacks and Latinos, in Illinois and nationwide, compared to their white counterparts.

According to Elissa Bassler, CEO of the Illinois Public Health Institute, a necessary component of good policy to address existing disparities is good data.

In her testimony before the joint hearing, Bassler said the state needed to collect better data in order to use public funds strategically. Otherwise, much-needed public funds could be inadequately disbursed, treating symptoms of disparities but not addressing root causes to actually address them.

“Traditional public health data on births, causes of deaths and certain diseases collected by existing methods don’t do enough to help communities, local government and the state understand local health concerns and community and social factors associated with health,” she said. “Nor do they help identify policies and interventions that address health inequities.”

In Chicago, the Chicago Department of Health conducts an annual survey of city residents to get health care data at a neighborhood level in order to have a better understanding of how to use municipal funds in different areas.

Bassler suggests lawmakers fund an annual statewide “Healthy Illinois” survey in the same model, broken down by ZIP code, which would extract information from residents on a wide range of topics such as access to health services, levels of civic engagement, childhood experiences, chronic health conditions, diet and financial security.

The data from the survey would be used by various state agencies involved in health and human services and would be available to municipal governments and private stakeholders such as hospitals and medical nonprofits, and would include every Illinois community as well as Chicago. 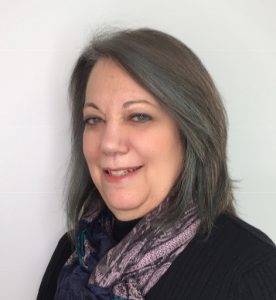 Bassler estimated the annual cost to the state to conduct the survey, if Chicago was included, would range from $1.75 million to $2.5 million depending on how detailed and how many interviews would be conducted.

Dr. Rita Ali, a Peoria city councilwoman and an administrator at Illinois Central College, discussed how the city used data to find racial and geographic disparities through ZIP codes and census tracts. This has helped the city come up with strategic plans and programs it wants to institute in the future to address disparities.

Drs. Vida Henderson and Karriem Watson, who work at the University of Illinois Cancer Center, told lawmakers about the significant disparities in cancer screening for Blacks and, by extension, the high rate of mortality when it comes to lung cancer, breast cancer for women and prostate cancer for men, in comparison to their white counterparts.

The pair of doctors advised lawmakers to invest money in pipelines to invest in Black and Latino communities on both ends of health care.

Watson’s and Henderson’s presentation included examples of where the lack of diversity in clinical trials meant treatments or procedures for dealing with certain ailments were ineffective when it came to Black communities. The pair told lawmakers that by investing in making sure more Black and Latino doctors and doctors who belong to other racial and ethnic minority groups are involved in medicine, in creating and administering trials, and making sure more Black and Latino subjects are included in clinical trials, health outcomes can improve as treatments and clinical procedures can be more tailored to underserved communities.

The Illinois Psychiatric Society and Southern Illinois University School of Medicine each submitted written testimony of policy proposals to the joint committee.

Their proposals included expanding telehealth services and insurance coverage for underserved communities, allowing more services to be billed to Medicaid, and supporting public relations and early education to inform communities about mental and substance use disorders and treatment, diet and best social and behavioral practices to preserve long-term health.

The Nov. 9 hearing was the final planned joint meeting of the Senate Public Health and Health and Human Services committees to address the Black Caucus’ agenda. Sen. Mattie Hunter, D-Chicago, who chaired the hearing, said in a news release Monday that she and the caucus are ready to reform the state’s health care system.

“Our health care system is deeply flawed, but over the last few weeks we’ve heard many recommendations on where to start reforming it,” Hunter said. “We must all be more informed about health literacy and examine the social determinants of health so that everyone has equal access to nourishment and well-being.”