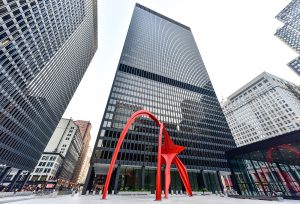 The Everett McKinley Dirksen U.S. Courthouse for the Northern District in Chicago. (Photo courtesy of ilnd.uscourts.gov)

SPRINGFIELD – A three-judge federal court panel has upheld the legislative redistricting plan that state lawmakers approved during a special session last summer, thus leaving in place the new maps that will govern state legislative elections for the next 10 years.

In their 64-page opinion, released Thursday, Dec. 30, the judges said the plaintiffs in the three separate lawsuits had failed to show that the redistricting plan violated federal law or the U.S. Constitution by diluting Latino voting power in Chicago and its surrounding suburbs or Black voting power in the Metro East region on the Illinois side of the St. Louis metropolitan area.

“In the end, we find that the boundaries for Illinois House and Senate districts set out in SB 927 neither violate neither the Voting Rights Act nor the Constitution,” the panel wrote. “The record shows ample evidence of crossover voting to defeat any claim of racially polarized voting sufficient to deny Latino and Black voters of the opportunity to elect candidates of their choice in the challenged districts.”

Last year’s redistricting process was complicated and slowed by the COVID-19 pandemic and delayed release of data from the 2020 U.S. Census.

Lawmakers initially passed one set of maps during their regular spring session in May, even though the census data had not yet been released, in order to meet the Illinois Constitution’s June 30 deadline for lawmakers to pass a plan before handing over the process to a bipartisan commission.

Republican leaders in the General Assembly, as well as the Mexican American Legal Defense and Educational Fund, or MALDEF, quickly filed suit, arguing the maps violated the one-person, one-vote principle because the districts were not close to being equal in population.

The Census Bureau eventually released the detailed population data on Aug. 12, and lawmakers convened a special session later that month to adjust the maps. Those maps passed the General Assembly on Aug. 31 and Gov. J.B. Pritzker signed them into law Sept. 24.

MALDEF and the Republicans challenged those new maps as well, arguing that they actually reduced the number of Latino-majority districts in Chicago and the surrounding suburbs, even though Latinos were one of the fastest-growing demographic groups in Illinois over the previous 10 years.

Separately, the East St. Louis Branch of the NAACP, along with other civil rights groups, challenged the way lawmakers had redrawn three House districts in the Metro East region, saying the new maps broke up the area’s Black voting population in order to protect two white Democratic incumbents, all to the disadvantage of the region’s only Black House member, Rep. LaToya Greenwood.

Democratic leaders who had approved the new maps argued that they were not drawn for the purpose of racial gerrymandering but, instead, to protect Democratic majorities. They also pointed to recent elections of Lt. Gov. Juliana Stratton and Secretary of State Jesse White, both of whom are Black, as well as Comptroller Susana Mendoza, who is Hispanic, and even former U.S. Sen. and former President Barack Obama to show that white majority voters will cross party lines to elect minorities.

Citing previous U.S. Supreme Court cases, the judges said that in order to prevail, plaintiffs had to prove three things — that a minority group is sufficiently large and geographically compact to constitute a majority in a single-member district; that the white minority group must be “politically cohesive;” and that the majority must vote sufficiently as a bloc to enable it usually to defeat the minority’s preferred candidate.

But the plaintiffs failed to make that case, the judges wrote, particularly with regard to the third factor because white Illinois voters do not necessarily vote as a racially-cohesive bloc.

They also ruled that partisan gerrymandering may be unfair, but is not illegal under federal law or the Constitution.

They noted that a 2016 effort to put a constitutional amendment on the ballot to establish an independent redistricting commission received popular support, but the initiative was struck down by the Illinois Supreme Court because it exceeded the scope of citizen initiative power.

“These are matters for the people of Illinois to continue debating,” the court wrote. “Levers other than federal courts are available to them, whether they are state statutes, state constitutions, and even entreaties to Congress, if they wish to change the current process. … Our role as federal judges is limited and does not extend to complaints about excessive partisanship in the drawing of legislative districts.”