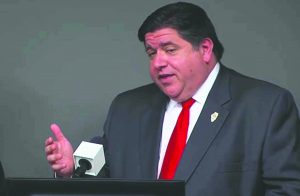 Gov. J.B. Pritzker announces that about 200 members of the Illinois National Guard will assist with flood and levy monitoring along the Illinois and Mississippi rivers. The governor made the announcement during a news conference May 30 in Springfield. (BlueRoomStream)

While the public assistance will allow county and municipal governments that have exhausted their available local resources to apply for grants and loans, a request for individual assistance that would benefit homeowners and business owners affected by flooding in 22 counties is still under review, Pritzker’s office said.

It is the first time the state has received a federal disaster declaration since 2013. The declaration required a recommendation from the Federal Emergency Management Agency and approval from Republican U.S. President Donald Trump.

“My administration stands with every resident and business impacted by this year’s flooding, and we will help our communities rebuild stronger and more resilient,” Pritzker, a Democrat, said in a statement. “I want to thank our congressional delegation for their advocacy, as well as our state and federal partners, for their help securing the additional resources I requested.”

The August request also included LaSalle, Lee, Peoria, Tazewell and Winnebago Counties, but they were not included in the governor’s release as counties that will be receiving aid.

The release said the governor “has also directed the Illinois Emergency Management Agency to work with affected areas not covered by this federal disaster declaration to explore all available options to help them in the wake of this disaster.”

This could include further damage evaluations, appealing the federal denial or identifying other funding sources, according to the release.

Under the public assistance program, FEMA awards grants to state and local governments and certain private nonprofit organizations that assist with disaster response and recovery.

These entities can apply for federal reimbursement of up to 75 percent of their “extraordinary” disaster-related expenses, per the Robert T. Stafford Act which governs federal disaster relief. Eligible work includes debris removal, emergency protective measures and the permanent restoration of public facilities, according to IEMA.

That number is more than triple the $19.2 million — or $1.50 per Illinois resident — in damages necessary to qualify the state for aid through the federal government.

Pritzker’s office said more than 1,000 miles of roadway and bridges were damaged or left inaccessible, and the flooding impacted more than 1,400 homes and 2.1 million people. Of those, 42 homes were destroyed, 178 sustained major damage, 419 had minor damage and 708 were impacted by rising floodwaters.

A Small Business Association survey identified 76 businesses and nonprofits with major impacts from this disaster and 217 with minor impacts.

“We will begin working immediately with FEMA and our county emergency managers to expedite this process as local governments will have 30 days to submit the proper documentation for funding,” said acting IEMA Director Alicia Tate-Nadeau. “While this declaration is specifically for local and state governments, we have been told that the governor’s request for Individual assistance, which helps homeowners and business owners, remains under review.”