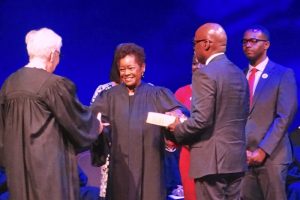 SPRINGFIELD – Lisa Holder White was sworn in Thursday, July 7 as the first Black woman to serve on the Illinois Supreme Court.

Holder White, who previously served on the 4th District Court of Appeals, was chosen to succeed one of her mentors in the legal profession, retiring Justice Rita B. Garman, who broke many barriers herself as a woman in what was then a male-dominated profession.

“It is truly a historic day for the Land of Lincoln,” Garman said, introducing Holder White. “But even while breaking barriers in the judicial system and serving as an inspiration to others, she has remained humble, true to her roots, and dedicated to ensuring that all those who come before the courts are treated with dignity and with respect.”

The installation ceremony took place at the Abraham Lincoln Presidential Library and Museum in Springfield, a place that Holder White said holds special meaning for her.

“Just last week, while in the Abraham Lincoln Presidential Library, I had the opportunity to see one of the approximately 12 existing copies of the Emancipation Proclamation signed by President Lincoln,” she said. “Being sworn in as a justice on the Supreme Court of Illinois in the museum dedicated to our 16th President, the man who freed the slaves, my ancestors, is of special significance to me. My heritage is a heritage that once involved minds and bodies that were shackled, and doors that were so, so long closed.”

Holder White, 54, a Republican, was named to the seat in May soon after Garman, also a Republican, announced her retirement. She will serve until Dec. 2, 2024, after a replacement is chosen in the November 2024 election. Holder White previously told Lee Enterprises that she plans to run for a full 10-year term.

A native of Decatur, Holder White earned a bachelor’s degree from Lewis University in Romeoville in 1990 and a law degree from the University of Illinois College of Law in Urbana-Champaign in 1993.

She was named an associate judge in the 6th Judicial Circuit in 2001, making her the first Black judge in that circuit.

She was appointed to the 4th District Court of Appeals in 2013 to succeed the late Justice John T. McCullough, who died the previous October, making her the first Black judge in the appellate district. She was elected to that seat in 2014.

Holder White previously served on and chaired the Illinois Supreme Court Judicial Conference Committee on Education, which is charged with planning and providing continuing judicial education for Illinois judges. She also has taught at the biennial Education Conference, which all Illinois state court judges are required to attend, and previously served as an instructor for the state’s “new judge school.”