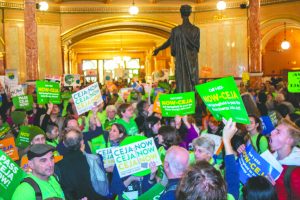 Renewable energy advocates rally Oct. 29 at the state Capitol in Springfield for the passage of the Clean Energy Jobs Act. The measure has stalled in the Statehouse amid federal investigations of energy giant Exelon, and there is no indication the bill will move anytime soon. (Photo by Jerry Nowicki/Capitol News Illinois)

SPRINGFIELD — Hundreds of clean energy advocates gathered Oct. 29 at the Capitol to show support for the Clean Energy Jobs Act, a carbon-cutting reform package that has stalled at the state government level amid ongoing federal investigations.

Those in attendance were part of the Illinois Clean Jobs Coalition, which is made up of hundreds of environmental groups, health care professionals, environmental justice activists, businesses and community leaders, consumer advocates, labor unions, and faith-based organizations.

The group warned of a “full climate crisis” and held signs urging “CEJA NOW,” a reference to legislation contained in House Bill 3624 and Senate Bill 2132. The goal of those bills is to achieve 100 percent renewable electricity production in Illinois by 2050 and to create a carbon-free energy grid in the state by 2030.

Advocates said the Clean Energy Jobs Act would result in more than 40 million solar panels and 2,500 wind turbines, which is enough to power 4 million homes, being built in Illinois by 2030. It would also aim to electrify the state’s vehicle fleet among several other provisions.

“I’m fighting to ensure that the people of Illinois — from one end of the state to the other — have the opportunity to benefit from the growing clean energy economy,” said state Sen. Cristina Castro (D-Elgin), chief Senate sponsor of CEJA. “The Clean Energy Jobs Act offers a comprehensive plan to make a low-cost, prosperous clean energy future a reality.”

But multiple aspects of the bill, including carbon cutting by 2030 and capacity procurement reforms in northern Illinois, would benefit Exelon, the parent company of ComEd, which is the largest electric utility in Illinois.

ComEd and multiple Statehouse regulars who have worked on behalf of the company have been the subject of FBI subpoenas pertaining to state government corruption in recent weeks. The investigations have fueled speculation that lawmakers would be unwilling to move any legislation forward that would benefit the company.

On Monday, however, a Clean Jobs Coalition spokesperson told Crain’s Chicago Business that the group’s committee “voted to suspend talks with the utilities,” including Exelon.

While several of the bills’ Democratic supporters spoke at the Capitol rally Tuesday, they did not give a legislative schedule update on a potential hearing for the bills, which continue to await committee assignments.

“Illinoisans are already feeling the effects of climate change, and no one is more aware of these threats than the young people who will have to live with them the longest and the marginalized communities that feel these effects most intensely already,” CEJA chief House sponsor Rep. Ann Williams (D-Chicago) said. “Passing the Clean Energy Jobs Act will not only reduce pollution that threatens our health, environment and livelihoods; it will also expand the economy to work for more of us and make Illinois a better business environment for the next generation.”

During the rally Tuesday, the Illinois Chamber of Commerce released a statement opposing the measure.

Chamber President Todd Maisch called the carbon dioxide limitations and timelines in the bill “unrealistic,” and called the capacity auction changes “another subsidy for Exelon.”

The capacity market reforms would remove Illinois from a multi-state auction to purchase energy capacity, allowing the state to conduct the auction.

Advocates said that would be beneficial to the state because it would allow for greater authority to choose energy sources that emit less carbon. Maisch said it would narrow the amount of energy producers taking part in the auction, therefore driving up costs.

Previously, lawmakers had spoken of combining CEJA and multiple other energy bills into one comprehensive energy reform package, but all of the bills appear to be stalled at the moment.

While CEJA advocates say they will continue to push for their package of reforms, Maisch said future energy legislation could be vastly different than anything that has been presented thus far.

“If the bill’s going to pass, it’s not a bill that you or I have seen yet. It still needs to be constructed,” he said.