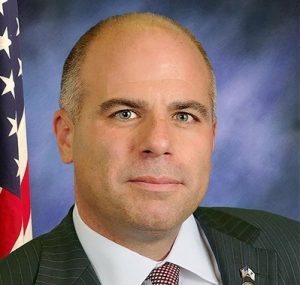 SPRINGFIELD – A former Republican state Senator and Conservative Party candidate for governor on Wednesday, Feb. 3 joined the list of ex-state officials who have been indicted.

Springfield-area lawmaker Sam McCann, who frequently butted heads with Republican ex-Gov. Bruce Rauner and eventually challenged him as a third-party candidate in 2018, was indicted on charges of fraud, money laundering and tax evasion related to his alleged use of campaign funds for personal expenses, according to the U.S. Attorney’s Office of the Central District of Illinois.

The indictment alleges that from May 2015 to June 2020 McCann “engaged in a scheme to convert more than $200,000 in contributions and donations made to his campaign committees to pay himself and make personal purchases.” Further, McCann concealed his fraud from donors, the public, the Illinois State Board of Elections and law enforcement authorities, according to the news release.

McCann, of Plainview, was a state senator from 2011 until January 2019 following his unsuccessful third-party run for governor in which he received about 4.2 percent of the vote, or 192,527 votes.

According to the U.S. Attorney’s office, McCann organized several political committees which received over $5 million in donations.

But in several instances, McCann used some of that money to purchase personal vehicles, pay personal debts, make mortgage payments and pay himself, according to the U.S. Attorney’s office.

That included $60,000 spent on a 2017 Ford Expedition and a 2018 Ford F-250 pickup truck, and he later used campaign funds to pay for fuel and insurance for the vehicles.

The indictment also details an alleged scheme in which McCann purchased two recreational vehicles, later establishing an account with an RV rental business in Ohio through which McCann rented the vehicles to himself, paid for by campaign funds. That also led to a tax evasion charge.

“McCann caused a total of approximately $62,666 in campaign funds be used to pay the rental cost of the vehicles. The rental business retained approximately $9,838 for commission and paid McCann, as the owner, approximately $52,827 by direct deposit to McCann’s personal checking account. McCann reimbursed the campaign accounts $18,000, resulting in more than $77,000 in campaign funds used to buy and rent from himself,” according to the news release from the U.S. Attorney.

McCann also allegedly cut himself a $20,000 cashier’s check from the campaign account in 2016 to pay off a 2011 loan. From May 2015 to August 2020, McCann allegedly spent approximately $64,750 in campaign funds on two separate personal mortgage loans.

His failed campaign for governor was lucrative as well, according to the indictment.

“McCann allegedly caused the Conservative Party of Illinois to issue approximately $187,000 in payments to himself personally and an additional $52,282 in payments for payroll taxes,” through June 2020, according to the news release. “Using a payroll service, McCann was allegedly able to conceal himself as the payee for the expenditures from the campaign account.”

McCann is scheduled to appear via telephone conference at 2 p.m. Feb. 16 before U.S. Magistrate Judge Tom Schanzle-Haskins for arraignment.

If convicted, McCann could face penalties up to 20 years in prison for each of the seven counts of wire fraud and one count of money laundering he faces. For tax evasion, he could serve up to five years.