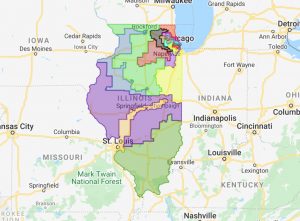 SPRINGFIELD – Illinois lawmakers appeared to be hitting some roadblocks Thursday, Oct. 28, in their effort to reach agreement on a new set of congressional district maps on the final scheduled day of their fall veto session.

During a meeting of the Senate Redistricting Committee on Thursday morning, Senate President Don Harmon, D-Oak Park, said he expected the latest draft to be put into bill form later in the day. But he also said he expected that bill to be introduced first in the House, and as of midafternoon Thursday the House Redistricting Committee had not scheduled a meeting.

“I don’t know yet,” she responded when asked if the maps would pass Thursday night or be delayed until January.

Part of the problem lawmakers face is the fact that, under the Illinois Constitution, any bill passed after May 31 cannot take effect until June 1 of the following year, unless it receives a three-fifths majority in both chambers. That’s 71 votes in the 118-member House, and 36 votes in the 59-member Senate.

Democrats currently hold 73 votes in the House and 41 votes in the Senate, but a consensus on what district lines would be acceptable had not been reached thus far.

Crain’s Chicago Business reported Thursday that one option being discussed would be to wait until January, when it would take only a simple majority in both chambers to approve the maps.

That, however, would leave lawmakers with only a very short window in which to approve the new maps. That’s because Jan. 13 is the first day candidates can begin circulating petitions to qualify for the primary ballot, according to a spokesman for the Illinois State Board of Elections, and those petitions must be submitted to the board no later than Monday, March 14.

House and Senate Democrats released their latest draft of a proposed set of maps late Wednesday night. Although it was largely similar to earlier drafts, the newest draft would pit three pairs of incumbents against one another in the 2022 primaries, should they all choose to seek reelection.

In southern Illinois, which saw the most dramatic population declines since the 2010 census, Republican Reps. Mike Bost of Murphysboro  and Mary Miller of Oakland would be paired together in a new 12th District.

In central Illinois, Republican Reps. Darin LaHood, of Peoria, and Adam Kinzinger, of Channahon, would face each other in a 16th District primary.

And in the western suburbs of Chicago, Democratic Reps. Sean Casten of Downers Grove and Marie Newman of La Grange would face off in a 6th District primary.

The plan would also create a second Latino influence district in a new 4th District that would include portions of Chicago’s Northwest Side, in neighborhoods such as Melrose Park, Stone Park, Franklin Park and Northlake.

Some people who spoke during that hearing expressed disappointment with the latest draft, including residents of what is currently the 3rd District on Chicago’s southwest side.

In 2020, Newman edged out then-incumbent Rep. Daniel Lipinski in the Democratic primary in that district and went on to win the general election. The latest proposal, like both other drafts before it, would put much of that district into a new 6th District, but the latest draft would pit Newman in a primary against Casten.

William Beaulieu and Clare Duggan, both members of a group called Coalition for Change IL3, said that group was formed, in part, to unite the diverse communities and bring about change in the 3rd District.

“We are politically active, we are involved. And we were unhappy when the coalition was formed with our current representative because of almost a complete lack of communication and opportunity for input,” Beaulieu said.

Members of that coalition have testified at nearly every public hearing about new congressional maps since the hearings began in early August, and Duggan said many of them had submitted their own proposed maps through the Democratic caucuses’ mapmaking web portals.

Despite that, Duggan said, while the latest draft would keep more of the current 3rd District intact than previous iterations, significant parts of the district would be broken off into other districts.

Under questioning from Republican senators, Harmon said the proposal was based on “the totality” of input that legislative leaders received from the public as well as other sources, including private communications with staff from various congressional offices.

“We are not obviously adopting one person’s map and presenting it as our own,” Harmon said. “We are taking input from all sources and it is reflected in the maps presented to the Senate.”

The Illinois congressional delegation is currently split 13-5 in favor of Democrats. According to the nonpartisan Princeton Gerrymandering Project, the latest plan would create 13 Democratic-leaning districts, three Republican-leaning districts and one competitive district with a slight Democratic edge.

That could prove important nationally for Democrats who are expected to lose seats in the 2022 midterms, and possibly their slim majority in the U.S. House.