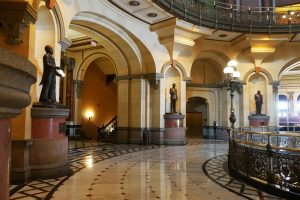 The State Capitol is eerily quiet on Friday, March 13, as lawmakers are away indefinitely due to the coronavirus update. (Capitol News Illinois file photo by Ben Orner)

SPRINGFIELD – Although many Illinoisans are being urged to work remotely from home during the ongoing coronavirus outbreak, that does not appear to be an option for state lawmakers.

A spokesman for Senate President Don Harmon said in an email that Article IV, Section 5 of the Illinois Constitution says sessions of each house of the General Assembly must be open to the public unless two-thirds of the members vote to close them. He also pointed to a state law that says legislative sessions must be held “in the seat of government,” which is Springfield.

That statute goes on to say the governor may convene a session “at some other place when it is necessary, in case of pestilence or public danger.”  Arguably, the COVID-19 epidemic might meet that standard, but the spokesman said the words “some other place” would most likely be interpreted to mean some other physical location.

Both the House and Senate have announced they will not meet next week, marking the second straight week the session has been put on hold due to the public health concerns.

Earlier this week, Gov. J.B. Pritzker issued an executive order suspending portions of the Illinois Open Meetings Act so local governments and other public boards could hold remote meetings. But the General Assembly is not covered by the Open Meetings Act.

Some members of Congress, meanwhile, are urging they be allowed to hold remote meetings. Among them is Sen. Dick Durbin, D-Illinois, who introduced a resolution Thursday, March 19 along with Ohio Republican Sen. Rob Portman, that would allow senators to vote remotely during a national crisis.

“We live in an age where national emergencies, public health crises, and terrorism can threaten the ordinary course of Senate business,” Durbin said in a statement. “We need to bring voting in the Senate into the 21st century so that our important work can continue even under