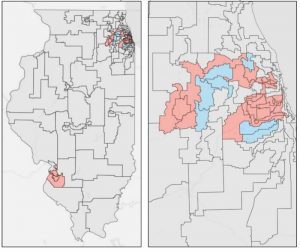 SPRINGFIELD — Plaintiffs in three lawsuits challenging the new legislative district maps that Democrats pushed through the General Assembly earlier this year have submitted their proposed changes, which would create more Latino- and Black-majority districts in Cook County and the Metro East region.

The latest filings, submitted to a three-judge federal court panel Wednesday night, will be the subject of a combined hearing that is tentatively set for the week of Dec. 6, although exact dates have not yet been announced.

Along with the proposed new maps, the filings also include written testimony of expert witnesses and arguments as to why the plaintiffs believe the approved maps are unconstitutional and violate the federal Voting Rights Act of 1965.

The plaintiffs include the two top Republican leaders in the General Assembly, Sen. Dan McConchie, of Hawthorn Woods, and Rep. Jim Durkin, of Western Springs, who hope to use the case to chip away at the Democrats’ current supermajorities in both the Illinois House and Senate.

Another set of plaintiffs includes a group of Chicago-area Latino voters represented by the Mexican American Legal Defense and Educational Fund, or MALDEF.

The third set of plaintiffs includes the East St. Louis branch of the NAACP, which argues that Black areas in and around East St. Louis that could have made up a Black-majority district were deliberately broken up and spread across separate House districts in order to protect two white incumbent Democrats.

All three of the suits name House Speaker Emanuel “Chris” Welch, Senate President Don Harmon and the Illinois State Board of Elections, along with its individual members, as defendants. They seek an order to block ISBE from implementing the maps that Gov. J.B. Pritzker signed into law Sept. 24 and to adopt the new maps that they have submitted to the court.

“The September Map violates Section 2 of the Voting Rights Act of 1965 … by diluting the votes of minority citizens and by preventing such citizens from participating equally in the political process and having an opportunity to elect candidates of their choice,” attorneys for the GOP plaintiffs argued. “Among other problems with the September Map, the drafters committed a fundamental error by falsely assuming there is no racially polarized voting in Illinois and failing to properly consider race and ethnicity when drawing the districts in the map as required by the VRA.”

All three sets of plaintiffs rely heavily on a 1986 U.S. Supreme Court precedent from North Carolina, Thornburg v. Gingles, which set out three factors needed to invalidate legislative district maps on the grounds of racial discrimination.

During legislative debates over redistricting, Republicans declined to offer their own map proposals, arguing that they believed redistricting should be done by an independent commission rather than elected officials who have a direct interest in the outcome.

They initially sued in June, after lawmakers passed their first redistricting plan using population estimates instead of official U.S. Census numbers, hoping that by invalidating those maps they could trigger a provision in the Illinois Constitution that hands the process to a bipartisan commission if no legislatively approved map is “effective” by June 30 in the year following a decennial census.

But even though the three-judge panel ruled that the June maps were unconstitutional, the judges said the General Assembly was given a “second bite at the apple” by coming back for a special session in late August and redrawing the maps using official census data.

The panel then instructed all of the plaintiffs to explain why they believed the September maps are unconstitutional and to submit their proposed remedies.

In response to that directive, lawyers for the GOP lawmakers submitted their arguments and proposed maps Wednesday.

“We submitted a proposal that fixes specific constitutional problems with the current map that had only served to keep entrenched incumbents in power,” Sen. Jason Barickman, R-Bloomington, chair of the Senate Republican caucus said in a statement Thursday. “Democrats led by Governor Pritzker had only one thing in mind when drawing their map — protecting politicians at the expense of the people of Illinois.”

Like the MALDEF plaintiffs, Republicans argue that even though Illinois lost population overall in the 2020 census, the Latino population grew by more than 300,000, mainly in Cook County and the surrounding collar counties.

Despite that, the maps that Democrats drew during a special session in August actually reduce the number of Latino-majority districts to just four.

And, like the NAACP plaintiffs, they argue that the September maps unfairly break up the Black population in the Metro East region when it is possible to create a compact Black-majority district.

The proposed GOP maps would create four House districts in northern Cook County where Latinos make up a majority of the citizen voting age population, seven Latino-majority districts in southern Cook County and one district in nearby Aurora, District 50, where Latinos make up slightly less than half the voting age population but would still have an opportunity to elect a Latino candidate.

Their proposed map would reconfigure House Districts 3, 4, 39 and 77, primarily in Chicago’s Northwest Side and neighboring suburbs like Franklin Park and Melrose Park. Other districts around those proposed Latino districts would be adjusted so they would be substantially equal in population, but otherwise would be similar to their configuration in the September maps.

In southern Cook County, the GOP map would reconfigure House Districts 1, 2, 21, 22, 23, 24 and 32, all in Chicago’s southwest side and adjacent suburbs such as Berwyn, Cicero, and Burbank.

In the Metro East area, the GOP map would reconfigure House Districts 112, 113 and 114 so that District 114, currently represented by Democrat LaToya Greenwood, of East St. Louis, would be a majority-Black district.

In their filing, the MALDEF plaintiffs argue that there is a long history of anti-Latino discriminatory practices in Illinois elections, particularly in Cook County, that have affected their ability to register, vote, “or otherwise participate in the democratic process.”

In the Metro East area, the NAACP argues that there has been a long history of racial discrimination against Blacks in East St. Louis and surrounding communities since Blacks began moving there in the early 20th century in search of industrial jobs.

That culminated in race riots in 1917 which led to the murder of “an untold number of Black men and women.”

Over the past 10 years, they note, the region has seen a “seismic loss” of population and a shift of its Black population out of East St. Louis and into surrounding suburbs, resulting in increasingly competitive races in some districts.

Their proposal would reconfigure all three of those districts in order to make the 114th District a Black-majority district.

Redistricting lawsuit to be heard in early December