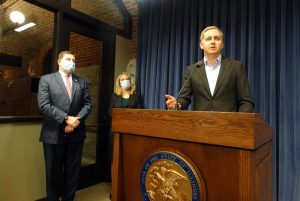 “This body, the special investigative committee, is the forum of which the speaker can come and state his position with regards to this statement of fact,” Rep. Grant Wehrli, R-Naperville, said during a Statehouse news conference. “What in this statement of fact is not true, speaker? We need to know.”

Wehrli was referring to a deferred prosecution agreement filed in July in federal district court in Chicago in which officials at ComEd admitted that over a period of years they awarded lobbying jobs and contracts to close associates of Madigan in order to curry the speaker’s favor for legislation that benefitted the company.

The company has been charged with bribery, but as part of the agreement federal prosecutors said they will not pursue the case for at least two years in exchange for the company paying a $200 million fine and having its officials cooperate in an ongoing investigation.

Madigan has not been charged with any crime and he has strongly denied any wrongdoing and has called the hearings a “political stunt.” But on Friday, Sept. 4, a former ComEd lobbyist and senior vice president for governmental affairs, Fidel Marquez, was charged with bribery conspiracy for his role in helping orchestrate the scheme. Marquez is the first individual in the case to be charged.

The special investigative committee will hold its first meeting Thursday, Sept. 10 in the Statehouse, but it is expected to be only an organizational meeting in which the six committee members will discuss the procedures they will use and a timetable for the investigation.

A spokesman for Madigan said in an email Wednesday that because it is only an organizational meeting, the speaker does not plan to attend. But it remains unclear whether he will attend future hearings or agree to testify in person.

The other Republicans on the panel include Rep. Tom Demmer, of Dixon, who will serve as the ranking member, and Rep. Deanne Mazzochi, of Elmhurst.

“Illinois is fed up with decades of corruption,” Mazzochi said. “That’s why I ran for office, and I want corruption exposed and ripped out of our state government.”

The investigative committee process is separate from the criminal investigation that is ongoing. It was prompted under the House’s own rules when three other Republican House members, led by Minority Leader Jim Durkin, of Western Springs, filed a petition with the speaker’s office requesting the probe.

The main task is to determine whether there is sufficient evidence to justify a formal charge and possible disciplinary action, up to and including expulsion from office. If the panel makes such a finding – which would require a vote from at least one of its three Democrats – a separate disciplinary committee would be formed to conduct what amounts to a trial.

“We’ll invite them to share any and all information that they can share with the committee,” Demmer said during the news conference.

The hearings will also be different from a criminal trial because there are different standards of proof in the General Assembly. In a criminal trial, prosecutors have to prove beyond a reasonable doubt that a defendant committed certain acts that constitute a crime, as defined in a statute. But that is not the standard that lawmakers use in an internal disciplinary proceeding.

“It’s about the integrity of the office. It’s conduct unbecoming,” Wehrli said. “To put it bluntly, basically bringing shame upon the office you hold.”