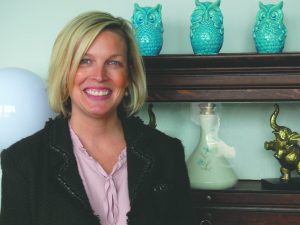 State Rep. Tony McCombie (R-Savanna) is calling for the establishment of a State Ethics Task Force to tighten ethics rules within Illinois government. McCombie is chair of the House Republican Organization, the political arm of the caucus that works and raises money to elect Republicans to the House. McCombie is serving her second term representing the 71st District. (Photo by Peter Hancock/Capitol News Illinois)

“To have the public’s trust, we must take action whenever confidence is broken,” Rep. Tony McCombie (R-Savanna) said in a news release. “We’ve seen the headlines of the FBI’s recent activity, including raiding the homes of legislators, lobbyists, and offices within the State Capitol. The cost of corruption is too high for Illinoisans to ignore.”

McCombie — who is chair of the House Republican Organization, the political arm of the caucus which works and raises money to elect House Republicans — said several events in the past year “raise concerns” that the state’s ethics rules are not strict enough. The first of which, she said, is the August indictment of state Sen. Tom Cullerton (D-Villa Park) on multiple counts of embezzlement from a labor union.

She also mentioned an ongoing and wide-ranging investigation centering on state Sen. Martin Sandoval (D-Chicago), whose Statehouse and district offices, as well as his home, were searched by federal agents in September.

Other recent events McCombie mentioned were a federal investigation into the campaign finance activities of former lawmaker and current state auditor general Frank Mautino and a secretary of state investigation of state Sen. Patricia Van Pelt (D-Chicago) for possible “economic conflicts of interest” for offering paid seminars to teach people about how to get involved in the emerging cannabis industry.

“The State Ethics Task Force will identify areas of concern, study best practices for ethics and transparency in public business implemented by other states and the federal government toward proposing legislation early next year to ensure Illinois has among the toughest ethics laws in the nation,” McCombie said.

She indicated that she hopes to have the legislation considered in the upcoming veto session, which begins Oct. 28.

Steve Brown, spokesman for Illinois House Speaker Michael Madigan (D-Chicago), said he could not comment without having seen the legislation.

He did, however, point to incidents during former Republican Gov. Bruce Rauner’s administration that also could be viewed as ethical lapses. The most notable of those, Brown said, is his continuing investment activity that included ownership interest in Sterigenics, the company that owns a medical equipment sterilization plant in Willowbrook that has been linked to higher cancer rates in that area.