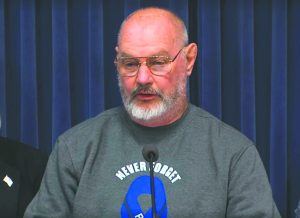 “While I will never get my wife back, it has become my mission to improve DCFS processes and protect DCFS workers so this never happens again,” said Don Knight, husband of the late Pam Knight, who died after she was attacked by the relative of a child she was taking into protective custody in late 2017. Knight spoke at a news conference May 23 at the Capitol in Springfield about legislation that would increase penalties for people who batter DCFS workers. (Photo by Grant Morgan/Capitol News Illinois)

SPRINGFIELD — A group of Republican lawmakers on May 23 urged the Senate to take up a bill that increases the penalties for attacks on state social workers employed by the Department of Children and Family Services.

The bill, in response to the death of DCFS case worker Pam Knight early last year in Whiteside County, makes it a Class 1 felony to batter a DCFS worker in the performance of official duties — the same protections against battery are given to police, firefighters and peace officers.

As with similar legislation introduced last year, the bill has garnered dozens of sponsorships from lawmakers on both sides of the aisle but has struggled to move through the legislative process to become law. This year, it passed the House on a unanimous 112-0 vote in early April, but stalled in a Senate committee shortly after.

Supporters of the measure, such as those at the May 23 news conference, say it would better protect DCFS workers who sometimes face violent or hostile situations during their investigations.

“The job of DCFS investigators is difficult, thankless and dangerous,” said Sen. Brian Stewart, the Freeport Republican who sponsored the bill in the Senate. “Right now, police officers, firefighters and other peace officers are protected by the law. DCFS investigators should have the same protections.”

Opponents say the bill does not get to the root cause of the problem.

“This bill doesn’t really address what happened in the one situation that people point to, and wouldn’t do anything to preclude that [from happening again],” said Ed Yohnka, spokesman for the Illinois chapter of the American Civil Liberties Union. “Just simply adding on this enhanced penalty doesn’t really address that concern.”

Yohnka was referring to the battery that led to Knight’s death, which happened in late September 2017 when Knight visited a home to take a child into protective custody and was severely beaten by a 25-year-old relative of the child. Knight died four months later.

Yohnka also said an “unintended consequence” of the bill is that it doesn’t exclude youth under DCFS care who might act out against their social workers in stressful or emotional moments.

“So a youth … who’s been traumatized by being removed from their family, could be retraumatized and charged with a felony over something that may not in fact be justified,” he said.

Savanna GOP Rep. Tony McCombie, who sponsored the legislation in the House, said that situation “hasn’t even been brought forth,” and the proposed statutory changes deal with the intentional infliction of severe bodily harm, not accidental outbursts.

Shortly after the May 23 news conference, the Senate assigned the bill to its Criminal Law Committee, the first action taken on it since early April. While it is unclear whether it will make it to the full Senate chamber for a vote, McCombie said she is “hopeful that this will be the first step that will lead to necessary protections” for DCFS case workers.

The legislation is House Bill 1482.