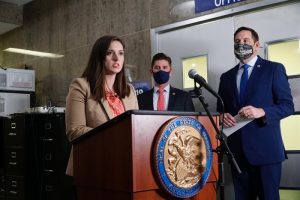 Leadership in the House Republican caucus — including Avery Bourne, of Morrisonville, Ryan Spain, of Peoria, and Tim Butler, of Springfield — excoriated House Democrats for what they called a secretive process for redrawing legislative and congressional maps. (Photo by Lee Milner/Illinois Times)

The “secretive” room on Capitol grounds where House Democrats are said to be drawing maps was first reported by WCIA-TV’s Mark Maxwell. In response to the report, House Republicans held a news conference Thursday, May 6 outside of the room to address their concerns.

The U.S. Census Bureau has not released official block-level data that Republicans and advocacy groups say is necessary to ensure a full accounting of Illinois’ citizens. That data isn’t expected to be released until Sept. 30, which is past the initial June 30 deadline written in the Illinois Constitution for the General Assembly to draw maps.

The Census Bureau has released less descriptive data, including data from the American Community Survey, which doesn’t include the detailed, block-level data showing exactly where people live — the kind of data needed to draw equal-size legislative districts.

State Rep. Ryan Spain, R-Peoria, said the ACS data is not accurate and is not appropriate to use when drawing the map.

“That’s what the Census Bureau says, that’s what advocacy groups across the state of Illinois have testified…more than 55 groups have said it is not appropriate that we use estimated data sources to do one of the most important things that happens every 10 years, and that is draw this map,” Spain said.

“We need to have accurate census data as the methodology that we use to draw this map. This is the doorway to further corruption in the state of Illinois, and it needs to stop,” he added.

Democrats have not said exactly what data has been used in the mapmaking process thus far. They did, however, point to the House Redistricting Committee’s 30 public hearings on the matter, noting they heard testimony from advocacy groups and the public providing input on the process.

During an unrelated news conference Thursday, May 6, Democratic leaders brushed off the Republicans’ criticisms, saying this is the normal process that state lawmakers have used in years past.

“We are just following the process like we always do, (the Republicans are) doing the same thing,” said Rep. Lisa Hernandez, D-Cicero, assistant majority leader and chair of the Redistricting Committee.

She said ACS data is just one source, but not the sole source being used to draw the maps.

“The participation of the public hearings, and the kind of information that has been offered, we’re really combing through all of that,” Hernandez said.

“It’s a wait-and-see, but like I said, we’re just off of the hearings, we’re looking at all this information, trying to figure it out. I’m sorry I don’t have the answer right now, maybe in a few weeks we can,” she said.

Rep. Avery Bourne, R-Morrisonville, said Gov. J.B. Pritzker is going back on his campaign promise that he would not sign a partisan-drawn map.

“They are going behind a closed door to pick their voters. Gov. Pritzker previously endorsed a fair map process and went so far as to say that he would veto a map that was drawn by politicians, partisans or their staff.”

The U.S. and Illinois constitutions require lawmakers to redraw congressional and legislative district boundaries every 10 years, following the decennial census, to account for population shifts.

Republicans have proposed using a bipartisan 16-member commission to redraw the maps, and that commission would send the maps to the eight-person commission for approval. But a law creating that new commission has stalled in the General Assembly.