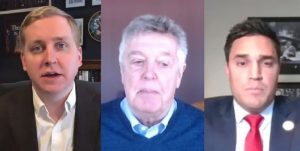 Republican Reps. Tom Demmer, Steve Reick and Adam Niemerg speak during a virtual news conference Feb. 1 to criticize new standards for Illinois teachers and administrators being proposed by the Illinois State Board of Education. (Zoom.us)

SPRINGFIELD – Republican Illinois state lawmakers are pushing back on proposed new standards for teachers and administrators that are scheduled for a hearing before a legislative rulemaking committee later this month.

Supporters of the proposed “Culturally Responsive Teaching and Leading Standards” say they’re merely an attempt to make sure that all educators are trained in ways to reach students across all racial, ethnic and cultural backgrounds. But critics are calling them a form of political indoctrination that seeks to inject partisan, liberal ideology into the classroom.

The new standards would apply to teacher training programs at Illinois colleges and universities rather than K-12 school curricula. They are scheduled to come up for legislative review on Tuesday, Feb. 16, before the Joint Committee on Administrative Rules, or JCAR, a legislative body that has oversight authority over state regulatory agencies.

If approved, the standards would take effect in October 2025 in order to give state-approved educator preparation programs ample time to incorporate them, according to a statement from the Illinois State Board of Education.

During a virtual news conference Monday, Feb. 1 three Republican House members said they hope JCAR will block the adoption of the proposed rules.

“You know, across the country and around the world, we’ve seen politics be injected in more and more parts of our lives. And the litmus test of ‘is someone progressive enough or not’ has come up time and time again,” said Rep. Tom Demmer, R-Dixon. “Unfortunately, the rule that’s being offered by the state board of education today, around culturally responsive teaching standards, is really just an attempt to impose further progressive politics into our education system, instead of focusing on the things that we know teachers, administrators, students and families across Illinois need.”

Demmer was joined in the news conference by GOP Reps. Steven Reick, of Woodstock, and Adam Niemerg, of Dieterich. Demmer and Reick both serve on JCAR.

Reick pointed specifically to a portion of the new standards that call on teachers to “understand and value the notion that multiple lived experiences exist, that there is not one ‘correct’ way of doing or understanding something, and that what is seen as ‘correct’ is most often based on our lived experiences.”

He also pointed to another provision calling on teachers to “(a)ssess how their biases and perceptions affect their teaching practice and how they access tools to mitigate their own behavior (racism, sexism, homophobia, unearned privilege, Eurocentrism, etc.)”

Another provision calls on educators to “(b)e aware of the effects of power and privilege and the need for social advocacy and social action to better empower diverse students and communities.”

“Let’s be clear. This rule is not an improvement to education,” Reick said. “It’s an attempt to interject politics into the classroom. The standards that ISBE wants to impose are beyond misguided. Requiring certain political viewpoints in our school systems is simply unacceptable.”

JCAR is a 12-member group that is evenly divided between House and Senate members and between Democrats and Republicans. Its main function is to review proposed agency rules to make sure they do not conflict with state law and to make sure administrative rules reflect the General Assembly’s intent when it passed a law authorizing such rules.

In most cases, the panel makes a finding of “no objection,” meaning the agency is free to adopt the final rule. Occasionally, when JCAR members have some concerns about a proposed rule, they will vote to make a “recommendation” that the agency go back and clarify a point or tighten up its language.

But JCAR also has authority to issue an “objection” to a proposed rule if enough members believe it is inconsistent with state law, that it would have an adverse economic impact on small businesses, municipalities or nonprofit organizations, or that it fails to meet some standard or requirement of the Illinois Administrative Procedures Act.

An objection may also be accompanied by a “prohibition” against adopting a proposed rule if JCAR believes it constitutes a threat to the public interest, safety or welfare.

An objection or prohibition, however, requires a vote of at least eight of the 12 members. That means even if all six Republicans voted to object, they would still need at least two Democrats to go along.

Carmen Ayala, the state superintendent of education, defended the proposed rules, arguing that they are intended to help address the wide achievement gaps between different racial and ethnic student groups.

“Culturally responsive teaching and leading helped me improve the reading and math skills of every one of our student groups when I was a district superintendent and to achieve double digit growth among my students of color,” Ayala said in a statement. “Cultural responsiveness is inclusive of all of the experiences our educators, students, and families bring to the classroom.”

The state of Illinois administers standardized tests each year in English language arts and math to students in grades 3 through 8 and once in high school.

According to scores from the 2019 tests, the most recent scores available, only 37.4 percent of all students met or exceeded the state’s standards for English language arts. That included 47.7 percent of all white students but only 25.6 percent of Hispanic students and 17.7 percent of Black students.

In math, only 32 percent of all students met or exceeded the state’s standards, including 41.7 percent of white students, 20.4 percent of Hispanic students and 11.8 percent of Black students.

Republicans at the Feb. 1 news conference said that’s an indication that schools need to focus more on teaching basic reading, writing and math skills, not on cultural sensitivity lessons. But Ayala argued that the two go hand-in-hand.

“As we help students recover from learning loss due to the pandemic, giving our teachers opportunities to learn about effective, equitable, and research-based strategies like cultural responsiveness could not be more important,” she said. “Every student deserves to feel welcomed, included, and accepted at school. Students are more engaged when they see their cultures represented in what they learn at school.”