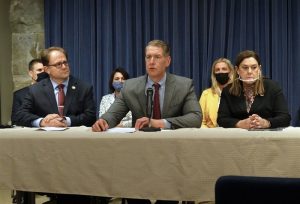 SPRINGFIELD – The Illinois Senate is gearing up for a debate over a package of ethics reforms, possibly as early as this week, but it’s one that Republicans say doesn’t go far enough.

Senate Bill 4, which moved out of the Senate Ethics Committee on April 21, is a package written largely by legislative Democrats that would enact new rules governing lobbying, campaign fundraising, who can serve on political committees and the operations of the General Assembly.

Specifically, it would prohibit elected officials, including members of the General Assembly, from lobbying other units of government on behalf of other entities. That became an issue when former Rep. Luis Arroyo, D-Chicago, who also lobbied the city of Chicago on behalf of a client, was indicted in 2019 for attempting to bribe a state senator.

It would also prohibit lawmakers and executive branch officials from going to work as a lobbyist within six months after leaving office, although it would allow lawmakers to work as lobbyists once the biennial session to which they were elected is over. The same prohibition would apply to lawmakers who are hired to work as “consultants” for businesses or groups that lobby the legislature.

Salaried appointees of the governor and other executive branch officials who are subject to Senate confirmation would be prohibited from serving as an officer of a candidate committee or being the designate beneficiary of such a committee.

Finally, the bill would establish the office of legislative inspector general as a full-time employee, create a uniform statement of economic interest form that would also apply to judicial candidates and prorate the monthly salary of lawmakers who leave office before the end of their term.

That bill reportedly has been the subject of negotiations between the chairs of the Senate and House ethics committees, Sen. Ann Gillespie, D-Arlington Heights, and Rep. Kelly Burke, D-Evergreen Park. But Gillespie indicated Monday that further changes may be made before the bill comes up for a vote.

“I remain committed to passing an ethics package this legislative session and am working with colleagues in both chambers to develop the best package possible,” she said in an email statement.

Senate Republicans, however, argued in a news conference Monday, May 17 that while the Democrats’ bill has some good reforms, it falls short of the kind of ethics legislation that they say Illinois needs.

“Our discussion on Senate Bill 4, while productive, was left with the promise of an amendment,” said Sen. John Curran of Downers Grove, the ranking Republican on the Ethics Committee. “It’s been four weeks now. We have two weeks left in this General Assembly.”

Curran is the lead sponsor of the GOP-backed ethics package, Senate Bill 1350, which contains a number of other provisions giving local state’s attorneys and the attorney general’s office more authority to investigate and prosecute cases of public corruption.

“This isn’t just about a few outliers taking bribes or breaking rules,” said Senate Minority Leader Dan McConchie of Hawthorn Woods. “This is about fundamentally reforming the system that doesn’t allow us to police our own house. I believe it’s un-American, it’s unfair, and it’s just fundamentally wrong.”

Senate Bill 4 is currently sitting on the Senate calendar awaiting final action. The deadline for final action is listed as Friday, May 21, although that deadline could be extended. The Republican package, which was introduced Thursday, May 13, has not yet been assigned to a substantive committee.

The final day of the session is scheduled for Monday, May 31.