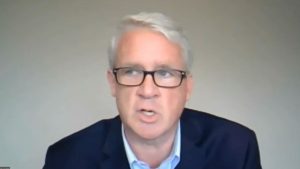 SPRINGFIELD – State Republican leadership is pushing for a vote in the upcoming legislative session to remove a graduated income tax amendment question from the November general election ballot.

“Times have changed dramatically since this initiative was first put forward,” Senate Minority Leader Bill Brady, R-Bloomington, said Monday in a video news conference. “But never more has our state’s economy been challenged than it will be, and is today.”

But Gov. J.B. Pritzker has said the revenues anticipated from the graduated income tax – estimated at more than $3.5 billion in its first full fiscal year before the COVID-19 pandemic – are now more important than ever amid uncertainty created by the spread of the virus.

The economic fallout from the pandemic and associated shutdowns has led to projected state revenues for next fiscal year plummeting by billions of dollars. Pritzker said at his news conference Monday that the tax, which would be in effect for only half of the next fiscal year, could bring in more than $1 billion in state revenues.

As it stands, it is up to the voters if the state’s constitutional requirement of a flat income tax will be scrapped to allow higher income tax rates charged on greater levels of income. Support from a majority of those voting in the Nov. 3 election or three-fifths of those voting on the ballot question will be needed for the amendment to pass.

While it took three-fifths of each state House and Senate to put the amendment question on the ballot, only a majority vote in each house would be needed to remove it.

“As to the likelihood of a vote being taken or a decision being made like that, I can’t speak to it,” Pritzker said during his May 18 COVID-19 briefing. “I can only say … that the GOP wants to keep people from voting on this, keep people away from the ballot box, says something about their lack of confidence in their position.”

Pritzker has already invested millions of his estimated $3.4-billion personal fortune to promote the ballot measure, which was one of his cornerstone campaign promises.

When asked during the videoconference Monday why voters should not be allowed to decide the measure, House Minority Leader Jim Durkin, R-Western Springs, named several other constitutional amendments that are backed by Republicans but have not advanced in the Legislature.

“Why won’t we allow the voters to vote on a fair map amendment? Why won’t we allow voters to vote for pension reform? Why won’t we allow for any type of constitutional protection of property tax owners? How about a constitutional amendment on ethics reform? There’s no balance in the state,” he said. “That’s why this one party has absolutely lost any type of reason or the ability to understand what is clearly at stake in Illinois government. What I just mentioned are more important to people in Illinois than to fulfill a campaign promise by the governor.” 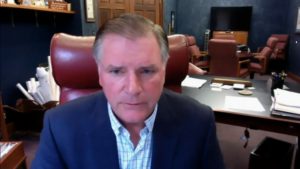 The current flat tax is 4.95 percent on all income earners in Illinois, but if the amendment passes, a new rate structure that has already been passed by the General Assembly will take effect in January 2021. For all but the top bracket in that proposed structure, each varying tax rate would apply to a specific margin of income.

Joint filers would pay the maximum rate of 7.99 percent on all income once their taxable income tops $1 million. For single filers, that rate takes effect on all income when it exceeds $750,000.

It would also raise the corporate tax rate from 7 to 7.99 percent, not including an existing corporate property replacement tax of 1.5 to 2.5 percent that is not changed by the already-approved measure.

While Republicans cited the COVID-19 pandemic as a new development necessitating new action on the amendment, the arguments on both sides remain generally the same as before the pandemic.

Chiefly, the Republican argument is that the tax rates that would become law upon the passage of the amendment are a “phony promise” from Democrats, who the GOP says will have an easier time raising taxes in the future because they will be able to vote on tax hikes for smaller portions of the public rather than an across-the-board hike which a flat tax requires. The actual vote threshold for a tax hike in the General Assembly would remain unchanged at a simple majority.

“Why should the Democrats who run the state be trusted with a check for any more revenue?” Durkin asked in the Monday video conference. “And when the revenue projections continue to fall as they already are, the same politicians will make more of their phony promises and start raising taxes…The recession caused by this pandemic will turn into a never-ending depression in Illinois with the progressive tax.”

Tax hikes, they say, will drive people from the state and hurt small businesses which are already reeling from the pandemic and associated stay-at-home orders. Income from the graduated tax, they also argue, will fluctuate more and is less reliable for budgeting purposes.

Proponents say 97 percent of Illinois taxpayers earn below $250,000 per year and would therefore pay less in taxes under the proposed structure. The raised revenue, they say, is necessary to pay Illinois’ pension obligations and continue to invest in state services.

“The Fair Tax promises tax relief to small businesses and middle-class families,” Senate President Don Harmon, D-Oak Park, said Monday in a statement. “I don’t know why in the middle of a pandemic they would try to take that option away.”

But Brady said the focus should be on making the business climate friendlier in Illinois.

“We can and will rebuild the state’s economy,” he said. “But this graduated income tax threat just gives more to worry about when we need people focusing on how they can rebuild their businesses, how they can go back to work, how they can begin rebuilding the economy of this state.”