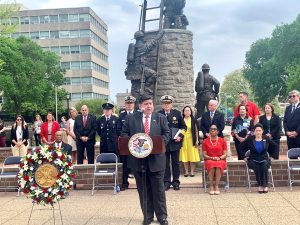 Gov. J.B. Pritzker speaks at the annual firefighter memorial and honor ceremony in Springfield on May 10. (Illinois.gov)

During the ceremony, governor and Perez also honored firefighters who went above and beyond on the job, displaying courage, pride and honor while protecting communities across the state.

“This memorial is dedicated to the firefighters of Illinois, who have given their lives in the line of duty, and to those firefighters who heroically lead with courage, pride, and honor,” said Pritzker. “Michael, MaShawn, Medhi, and Garrett will live on in our memories, in the lives of those they’ve saved, and in the hearts of those they’ve touched. May their memories be a blessing.”

“Today at the Fallen Firefighter Memorial, we honored four of our bravest brothers who gave their lives in service to the people of Illinois,” said Perez.  “We will be forever grateful for their courage and ultimate sacrifice in the performance of their duties.  They put the lives of others ahead of their own, which is our highest calling.  I also want to personally thank every firefighter who was recognized today for their bravery in the line of duty during the Medal of Honor Ceremony.  Illinois is home to a fire service that is second to none.”

Loved ones of the fallen firefighters were presented with the “Death Duty Gold Badge” by the Fire Marshall during the ceremony. This year’s honorees include:

“As firefighters, our members took an oath to protect the citizens and property of the various communities across Illinois. Each one of us take that oath very seriously. Today we honor those who gave the ultimate sacrifice in the line of duty. We will never ever forget them or their families. We also honor those whose actions went above and beyond the call of duty,” said Chuck Sullivan President of Associated Fire Firefighters of Illinois. “While they will all say they were “Just doing their job” we all know it takes courage, guts and determination to do this job. The Associated Fire Fighters of Illinois (AFFI) proudly stands with our brothers, sisters and their families on this day, and every day.”
Additionally, one firefighter was awarded the Medal of Honor. This is the highest award given by the State of Illinois to a firefighter for an act of outstanding bravery or heroism, by which the firefighter has demonstrated in great degree the characteristics of selflessness and personal courage above and beyond the call of duty, under adverse conditions, with the possibility of extreme personal risk.

Seven firefighters were honored with the Medal of Valor award. The award is given by the State of Illinois to a firefighter for an act of heroism or bravery that clearly demonstrated courage and dedication in the face of danger while in the performance of duty. Recipients include: