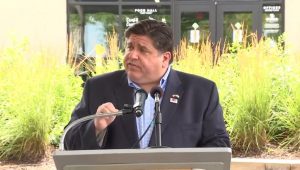 Gov. J.B. Pritzker speaks Thursday, July 16 at the Rockford City Market to encourage more Illinoisans to complete the 2020 U.S. Census. The state has a 66.9 percent response rate currently, tying it with Virginia for 7th among all states. (BlueRoomStream.com)

The state has a 66.9 percent census self-response rate currently. That’s nearly 5 percentage points better than the 62.1 percent national rate, but well below the state’s 2010 final self-reporting tally of 70.5 percent. In 2000, the self-response rate in Illinois was 69 percent.

Pritzker’s message at the Rockford City Market was that filling out the census is “an act of civic engagement” that has a direct effect on the amount of federal funding the state receives. In turn, an undercount often disproportionately impacts the neediest communities in the state, which typically have lower response rates.

“The same ZIP codes that are impacted the worst by COVID-19 — those that have been hurting for generations — are on track to be the most undercounted at a time when frankly we need full funding,” he said.

Based upon the 2010 count, the state collects $34 billion in federal funds annually, the governor added.

This year’s numbers have Illinois tied with Virginia for seventh among all states. The response portal will be open until Oct. 31 due to delays caused by the COVID-19 pandemic.

The outreach is done through a “hub and spoke” model in which funding passes through IDHS to 31 intermediary organizations that lead outreach efforts in 12 regions of the state. Those organizations partner with other community groups to target outreach at a hyperlocal level.

While the governor said the census has historically “not been an accessible tool,” leaving “too many people locked out and left behind,” he pointed out that there is no citizenship question on the census form and organizers are doing all they can to make communities that are fearful of such a question comfortable in filling out the form.

“It’s been incredibly uplifting and inspiring to see so many Illinoisans taking to the streets to demand justice, so I need everyone to know, filling out the census is an act of engagement,” he said.

In May, however, some of those census community organizers told Capitol News Illinois their outreach efforts have been stymied by the pandemic and associated stay-at-home orders.