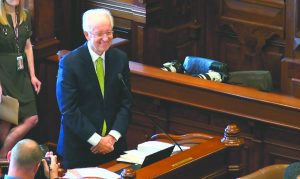 Sen. Terry Link (D-Indian Hills) smiles as the gambling expansion bill he has sought to pass for years was approved Sunday by the Senate at the Capitol in Springfield. But Link wasn’t all smiles Sunday. “I’ve only been doing this for 20 years to get this done, and it’s a little emotional,” he said, his voice wavering and tears welling. (BlueRoomStream.com)

Senate Bill 690, sponsored by Indian Creek Democratic Sen. Terry Link, passed that chamber on a 46-10 vote after being approved by House lawmakers the day before. Gov. J.B. Pritzker has already announced his intention to sign it into law.

“I’ve only been doing this for 20 years to get this done, and it’s a little emotional,” said a teary-eyed Link during floor discussion of the bill.

Link estimated that gambling expansion along with other revenue-raising measures in the bill could net Illinois more than $12 billion in the next six years.

“This key piece of legislation really is going to make an economic difference of keeping our dollars home,” he said, adding he expects “thousands of jobs and billions of dollars in construction across the state.”

That construction would go toward the six new casinos authorized by the bill in Waukegan, Rockford, Danville, South Suburbs, Williamson County and downtown Chicago.

Casinos, race tracks and sports facilities that seat more than 17,000 people, such as Wrigley Field or United Center, would also be eligible to buy sports betting licenses under the bill, making Illinois one of about a dozen states to legalize the practice after a U.S. Supreme Court ruling last year allowed it. 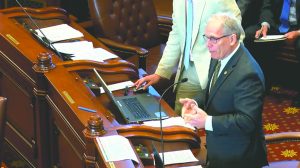 Sen. Dave Syverson (R-Rockford) thanks Sen. Terry Link for including Rockford on the list of six communities authorized for new casinos in the gambling bill passed Sunday by the Senate and Saturday by the House. (BlueRoomStream.com)

In a news release Saturday, Pritzker expressed his support for the measure and praised the lawmakers who have unsuccessfully tried to expand gambling in the state for years.

“Legalized sports betting and expanding gaming will create jobs up and down the state, … where communities hungry for employment will see 10,000 new jobs,” he said. “Gaming expansions in this state have been attempted and failed for years. … Today is a win for the whole state.”

Revenues raised from the new casinos, the selling of sports betting licenses, and a higher tax on video gambling machines would go toward funding the vertical components of a long-term capital infrastructure plan, such as state building renovations. Sports betting licenses would range from $3.2 million to $20 million and be offered to both brick-and-mortar facilities and to online operators, with taxes of 15%.

Under the bill, race tracks in the state would be able to install slot machines and table games, turning them into racinos. A pilot program will also assess sports betting through the Illinois Lottery, a plan that was considered, but dropped by lawmakers earlier in the session.