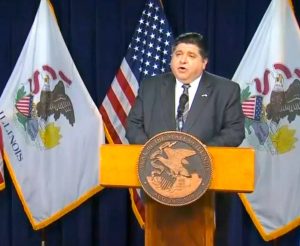 Gov. J.B. Pritzker talks to reporters at his daily COVID-19 briefing Wednesday, Nov. 4 in Chicago, addressing potential next steps in response to the failure of a graduated tax constitutional amendment. (Bluestream.com)

With 98 percent of precincts reporting, voters had rejected the amendment by a 55 percent to 45 percent margin. The Associated Press called the race for the “No” camp, as a large number of outstanding mail ballots were almost certainly not enough to make up for the deficit of approximately 500,000 votes.

In his daily COVID-19 briefing in Chicago on Nov. 4, an agitated Pritzker lashed out against the Republican Party, warned of cuts to public safety and human services and said several other options were on the table for addressing state budget deficits that have been ongoing for decades.

“Illinois’ fiscal problems haven’t gone away. We now sit at a crossroads,” Pritzker said. “Our state finances still require fundamental structural change. In the coming days, I’ll be talking with the leaders in the General Assembly about our path forward. But here’s what we know for sure: I promised to be a governor who balances the budget and pays the bills that my predecessor left behind. I promised to make sure that our kids get a good education, that we invest in job creation and that we build a better future for Illinois. There will be cuts, and they will be painful.”

The failure of the amendment marks the end of a fight led by Pritzker which began legislatively in April 2019 and even before that politically when Pritzker was running for governor in 2017 and 2018.

Pritzker spent $58 million of his own personal fortune to promote the amendment, while billionaire Republican donor Ken Griffin, the state’s wealthiest person and founder of the hedge fund Citadel, dropped more than $53 million into an effort to defeat the tax change.

The governor had billed the graduated income tax proposal —which would have imposed higher tax rates on higher income earners — as the best of three options, the others being a 20 percent increase to the state’s flat tax or 15 percent across-the-board cuts to state spending.

But he has also frequently warned that discretionary spending has already been reduced drastically in several areas in recent years due to a two-year state budget impasse in which the state racked up a $16 billion backlog of unpaid bills. As of Nov. 4, the Illinois Comptroller’s office estimated that backlog at $8.3 billion.

“My predecessor, Gov. Rauner, tried to drag the state underwater with painful and draconian cuts that in the end were blocked by both Republicans and Democrats,” Pritzker said on Nov. 3. “His approach devastated higher education, child care, human services, and hollowed out state agencies like those that manage public health and unemployment benefits, all while adding billions of dollars of debt on to our bill backlog.”

The impasse occurred beginning in July 2015, lasting 736 days, after lawmakers allowed a temporary income tax hike to expire which decreased the individual income tax rate from 5 percent to 3.75 percent. That reduced state revenues by about $4.5 billion, but in the absence of a state budget targeting cuts in spending for two years afterward, the state continued to spend at a rate far outpacing revenues. As a result, many agencies, public schools and universities all eventually saw drastic drops in funding as obligated state expenditures took precedence.

“You could call this the republican approach option to raise revenue within our current regressive flat tax system and impose a higher flat tax which falls disproportionately on the working poor and the middle class.”

Complicating matters is a global pandemic that has ripped a hole in state finances. Even before COVID-19 redefined the state’s revenue picture, Pritzker had pegged the state’s structural, year-after-year budget deficit at about $3.2 billion. Considering lost revenues due to COVID-19 and associated economic restrictions, that deficit could exceed $7 billion with the graduated tax’s failure, Pritzker predicted in April.

In September, Pritzker directed state agency directors to prepare for cuts of up to 5 percent for the current fiscal year and 10 percent next fiscal year, which begins July 1.

On Sept. 24, Lt. Gov. Juliana Stratton said lawmakers “will be forced to consider raising income taxes on all Illinois residents by at least 20 percent, regardless of their level of income” if the graduated income tax fails. That would push the current tax rate to about 6 percent, and would require a simple majority vote in a Legislature dominated by Democrats as well as a signature from the governor.

The state’s path forward could include some combination of cuts and tax increases, as well as borrowing from the federal government’s Municipal Liquidity Facility program which was authorized in the state’s budget for fiscal year 2021.

“Everything is on the table,” Pritzker said.

Pritzker has also frequently urged the federal government to pass a COVID-19 stimulus package providing aid to states but talks had stalled between Democrats in the House and Republicans in the Senate and White House prior to the election. As of Wednesday, it remained undecided as to whether Democrats would take the presidency or U.S. Senate.

Some who lobbied against the amendment, including libertarian-leaning think tank Illinois Policy Institute, which was once closely tied to Republican former Gov. Bruce Rauner, have suggested the results demonstrate a need for structural pension reform.

Annually, payments to the state’s pension liabilities — which exceed $137 billion in total —account for 20 percent or more of the state’s operating budget. That’s more than $8 billion total general revenue fund spending that will go to the state’s five pension funds this fiscal year.

But reforms to the pension system passed by lawmakers in 2013 were unanimously struck down by the state Supreme Court in 2015, and any major changes would also require an amendment to the Illinois Constitution, which currently protects existing pension benefits from being diminished.

Legislative Democrats have thus far not shown an appetite for such reforms, however, and three-fifths majorities in each chamber of the General Assembly would need to vote on the measure before it could be put to voters.

The opposition campaign also centered on the trustworthiness of state politicians and the possibility that the amendment would make it politically easier to raise a retirement tax on portions of the electorate, even though that was never proposed and the amendment would not have changed the vote threshold needed to tax retirement income.

“It is clear that Illinoisans do not trust this legislature and this administration to spend more of their precious tax dollars without restraint,” Illinois Chamber of Commerce President and CEO Todd Maisch said in a statement. “We believe we’re on our way to hearing from the electorate that Illinois needs a lot more than tax increases to fix our economy. While it may not be official this morning, it certainly looks like Illinoisans have made their voices heard and want a plan for rescuing our state that is not just raise taxes, raise taxes and raise taxes some more.”

Pritzker addressed pensions and trust in government Tuesday as well.

“I’m going to continue to make sure that we’re paying the pensions that are owed to people and that we don’t tax retirement income. I will stand Foursquare against any tax on retirement,” he said.