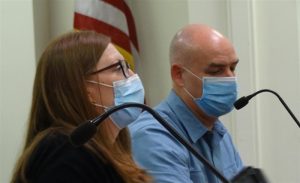 SPRINGFIELD – Despite a temporary rule that extends the expiration dates for Firearm Owners Identification cards and concealed carry permits, many Illinois gun owners are still finding it difficult to buy weapons and ammunition.

That was one of the issues that came up Wednesday, Oct. 14 during a meeting of the Joint Committee on Administrative Rules, a legislative body that oversees the state’s regulatory processes.

“The problem that that a lot of my constituents are having is firearms dealers and businesses are not accepting the FOID cards that are expired, even though they know … that the state of Illinois has said, hey, they’re still good beyond the expiration date,” state Sen. Paul Schimpf, R-Waterloo, said during the hearing.

Schimpf was speaking to officials from the Illinois State Police, which recently renewed an emergency rule first adopted in April that extends the expiration date of FOID cards and concealed carry permits by 12 months, as long as the permit holder submits a renewal application. On Sept. 3, the agency extended that rule to 18 months.

ISP, which issues firearm permits, had been struggling with a backlog of applications since long before the pandemic began. But the problem multiplied after the pandemic hit and again later amid the civil unrest that erupted following the May 25 murder of George Floyd at the hands of Minneapolis police.

According to data that ISP provided in an email, 147,862 FOID card applications were received during the first four months of the disaster declaration, March through June. That was more than double the number received in the prior four-month period.

From July through September, ISP said it received 135,798 applications for new or renewed FOID cards.

Richard Pearson, executive director of the Illinois State Rifle Association, said in an interview that he receives complaints from gun owners who are frustrated about the delays on a daily basis.

“One guy has been waiting for three years and no explanation of why he hasn’t gotten it or anything. So, yeah, we’re actually forwarding those all to our attorney,” he said.

Under state law, FOID cards are supposed to be issued or denied within 30 days of an application, but the backlog has caused most applicants to wait for several months. Pearson said there are currently 12 lawsuits pending in various courts arguing the delays amount to a violation of individuals’ constitutional right to bear arms.

According to the Giffords Law Center to Prevent Gun Violence, Illinois is one of only three states, alongside Massachusetts and New York, that require a license to buy and possess a firearm. Ten states require a permit to purchase at least some types of firearms, but not all of them require a license to continue owning one.

Pearson confirmed that despite the emergency rule extending the expiration dates, many gun dealers still will not sell firearms to anyone who does not have a current, valid FOID card.

“I know that they’re worried about liability,” he said. “And so, (the rule) might say that they’re okay, but the law says you can’t do it, and the executive order overrides the law. It is a big quagmire. Plus the fact that these people can’t buy ammunition in Illinois. And so they have to go on online and buy it, and to get it online, you have to supply the provider of that ammunition, the seller of that ammunition, with a valid FOID card and they don’t have a valid FOID card.”

Pearson said that has been especially frustrating for hunters because deer and waterfowl hunting seasons are coming soon.

“And deer slugs in some places are in short supply,” he said. “So, you know, you’re supposed to have a valid FOID card while you’re out hunting. But of course, the executive order overrides that, so they’re not doing anything about it.”

ISP general counsel Yvette Loizon said during Wednesday’s hearing that the agency has heard directly from firearms dealers about the issue.

“It’s an issue that we are cognizant of, and we are looking into ideas in different ways where we could help alleviate some of those problems,” she said.

An ISP spokesperson said in an email that the agency has been in the process of hiring more analysts to process applications since early this year.

“The hiring process is ongoing and includes a minimum six-month training program to ensure applications are accurately and efficiently processed,” the spokesperson said.