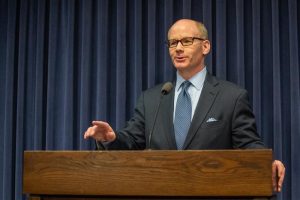 Kimberly Lightford, D-Maywood, will remain the chamber’s majority leader, while Bill Cunningham, D-Chicago, will become an assistant majority leader and president pro tempore — a position once held by Harmon under former President John Cullerton before he changed the caucus’ leadership structure.

Noticeably absent from the list is Sen. Terry Link, D-Indian Creek, who was an assistant majority leader under Cullerton. Chicago newspapers have identified Link as the unnamed senator who cooperated with the FBI and wore a wire in conversations with indicted former Rep. Luis Arroyo. Link has denied the allegation and has not been charged with any wrongdoing.