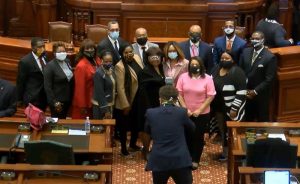 Members of the Illinois Legislative Black Caucus pose for a photo on the House floor after passing a health care reform bill Thursday, March 18 that was part of the Caucus’ four-pillar legislative agenda. (Blueroomstream.com)

House Bill 158, a 227-page bill introduced by Democratic Rep. Camille Lilly of Chicago, contains dozens of provisions meant to eliminate race-based and other inequities in the Illinois health care system and expand the medical services available to low-income residents and residents of color. A last-minute amendment added March 18 also enhanced dementia training requirements for the Illinois Department on Aging.

The other pillars of the Black Caucus agenda included public safety, economic opportunity and education. In January’s lame duck session, the General Assembly passed bills tied to those three pillars, but a previous version of the health care bill failed to pass.

Gone from the bill relative to its lame duck counterpart are provisions that would have replaced the state’s Medicaid managed care program with a standard fee-for-service payment system.

Managed care, which is a system of private insurance companies hired by the state to manage Medicaid, is how a majority of the state’s residents on Medicaid are enrolled in the program.

Multiple House Republicans praised Lilly for the intent of the bill and the changes made from the lame duck version but expressed that they still had unaddressed concerns regarding the total cost of HB 158 and its implementation.

“Let me commend you on the incredible amount of work that you have put into this legislation, working with your colleagues, working with all of us actually… Because there are so many components to this bill that are extremely helpful,” State Rep. Norine Hammond, R-Macomb, said on the House floor on March 18. “For many of us on this side of the aisle we are hearing some pretty astounding numbers… According to our figures to fully implement this would be somewhere between $12 and $15 billion.”

Lilly disputed those figures and said Democrats were still working on an estimate for the total cost. The bill is also subject to appropriations, which Lilly said will result in Democrats working with Republicans to determine what parts of the bill will be fully funded, and what provisions will see a cut when it comes to negotiating the state’s operating budget.

Republicans ultimately opposed the bill for its proposed fiscal impact and suggested the bill be broken into several smaller bills.

Republican Rep. C.D. Davidsmeyer of Jacksonville pointed to K-12 education funding in floor debate. State law calls for an added $350 million to the K-12 funding formula each year, but for the second consecutive year, Gov. J.B. Pritzker has proposed keeping the funding flat.

“(The governor) said we didn’t have enough money for something that wasn’t subject to appropriation – $350 million that was promised to go to schools is not going to go to schools because we don’t have the money and now you’re talking about adding $5 to $12 billion of additional cost to the state,” he said.

Democrats countered that improving health care of Illinoisans would be worth the cost, even as they disputed the numbers cited by Republicans.

HB 158 passed the House 72-41 and now heads to the Illinois Senate for consideration.