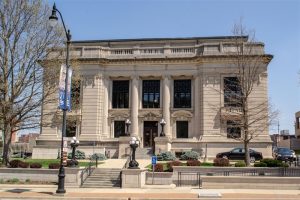 SPRINGFIELD — An Illinois Supreme Court decision Wednesday, April 21 clarified that the state election code prohibits a person from collecting signatures for both a party candidate in a consolidated primary and an independent candidate in the consolidated general election that follows.

The court interpreted the section of the election code that is referred to as the prohibition on “dual circulators.”

The question about “dual circulators” was brought before the state’s highest court by Adonis Elam Sr., an independent candidate for village board trustee in the village of Riverdale in south suburban Cook County.

Elam appealed to the Supreme Court after the village of Riverdale’s electoral board and the Cook County Circuit Court found that Elam’s name should be removed from the ballot because multiple signatures on his nominating petition were invalid.

Both Elam and the Democratic candidate were to appear on the ballot for the municipal consolidated general election.

This section that prohibits “dual circulators” applied to Elam, the electoral board and circuit court decided, rendering his petitions invalid because he lacked the minimum number of signatures after the signatures collected by the three people were removed.

On April 1, the Supreme Court agreed with the electoral board and circuit court, keeping Elam’s name off the ballot for the April 6 consolidated election.

The court’s unanimous opinion addresses a split in two separate appellate courts that reached different interpretations on the issue of “dual circulators.”

In another 2013 case, the First District Appellate Court interpreted this section of the election code to prohibit a situation where a person circulated petitions for a party candidate in the consolidated primary and an independent in the consolidated general.

The Supreme Court justices ruled that applying the Fourth District’s interpretation would essentially nullify the section’s prohibition on circulating petitions for both an established party candidate and an independent candidate because independents cannot run in the primary.

They agreed with the First District’s interpretation, and overruled the decision from the Fourth District.

The “dual circulators” prohibition of the election code “clearly prohibits situations such as this, as it would undoubtably cause voter confusion,” the opinion states.