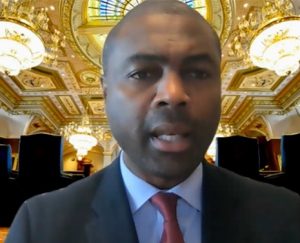 House Bill 168, sponsored by Democratic Rep. Daniel Didech of Buffalo Grove, would amend the Humane Care for Animals Act to remove domestic pets from the household of persons known to the courts as a danger to animals.

Individuals who have been convicted at least twice of aggravated cruelty or violations such as dog fighting are barred from owning or having custody of any animal. Didech’s legislation would give discretion to judges to extend that prohibition to other members of the offender’s household to remove any access they may have to an animal, even if the pet belonged to a spouse, sibling or roommate.

The prohibition would be lifted for the others involved once they no longer shared a home with the offender. The length of the ban would be left up to the judge presiding over the offender’s case.

Another bill, introduced by Rep. Sonya Harper, D-Chicago, as the Firearm Violence Prevention and Reduction Study Act, would create a 10-year study on methods Illinois can pursue to decrease deaths and injury caused by guns.

While the legislation calls for the study to be conducted by the Illinois Department of Public Health, Harper said she is also looking into whether the Department of Human Services would be better suited to take on the study.

The bill would provide $150,000 annually to the department conducting the study.

“In the time of COVID, the Department of Public Health really should be keeping mission-centric on the spread of disease and not necessarily, you know, jumping into gun issues because I think that’s going to detract from its mission as opposed to enhance it,” she said. “I’m not seeing this as a quote unquote, public health issue and I’m actually concerned about classifying it as a public health issue as opposed to an individual and their choices.”

Ultimately, both bills received unanimous approval from the committee, receiving 19 votes to be advanced to the House floor, with sponsors acknowledging further changes could be made to the bills before they come to a House vote.

Only one bill introduced in committee March 9 received a split vote along partisan lines.

Backed by Chicago Democrat Rep. La Shawn Ford, House Bill 434 would greatly expand the ability of Illinoisans to expunge arrest and court records. If passed, the bill would allow for defendants whose criminal charges are dismissed with prejudice or result in acquittal to have records relating to those charges immediately expunged at no cost to the defendant.

The defendant or their attorney could file a petition for expungement at any time. The only exception under the law would be minor traffic offenses.

Prosecutors and judges involved in the case could choose to oppose the petition.

Republican Rep. Patrick Windhorst of Metropolis raised the question of cases where multiple charges stemmed from the same arrest or investigation and only some charges were dismissed or resulted in acquittal while others resulted in conviction.

Windhorst asked if sealing, which hides records from public view but does not destroy them as is the case with expungement, would be more appropriate in those cases.

The bill ultimately was advanced to the House floor with the 12 Democrats on the committee voting for its passage and the seven Republicans voted against it.