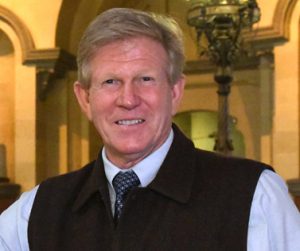 The resolution also condemned the lawmaker for displaying the insignia of an extremist militia group on his truck.

Miller of Oakland defended his presence at the Save America Rally where former President Donald Trump spoke, and Miller denied taking any part in the violent storming of the Capitol that followed the rally.

Miller said he was in lockdown with his wife, Congresswoman Mary Miller (R-IL), in a Capitol office building while the riots occurred until 8 p.m. that evening.

“I condemn any and all violence. I can assure you that my dedication to the safety and security of our state and our country’s citizens is second to none. We may disagree on policy, but at the end of the day, all of our commitments to our constituents is making Illinois a better place, and all these ideals are one in the same,” Miller said on the House floor.

The resolution, introduced by Rep. Bob Morgan, D-Deerfield, also criticizes Miller for allegedly adorning his truck with decal for an anti-government militia group known as “The Three Percenters.”

House Resolution 132 claims that Miller violated his oaths to the U.S. and Illinois constitutions by “actively and publicly promoting the actions of an internationally recognized para-military hate group,” for having the decal on his truck.

While he did not comment on the decal during his remarks on the House floor, Miller has denied being a member of The Three Percenters, and stated he removed the sticker from his truck, according to news reports.

The resolution also claims Miller “through his continued actions and instigations, has created an environment that potentially threatens not only the sanctity of the Illinois General Assembly but also the safety of the members and their staff.

House Leader Jim Durkin, of Western Springs, said the resolution is premature because the Legislative Inspector General’s investigation is not complete.

“Within your resolution you make very bold, broad claims and conclusions, which you are asking us to assume is factual…I think a prudent person would say, ‘Why don’t we wait to find out what the conclusions are?’ Because there is a chance that the IG will determine that this is an unfounded complaint, and that we’ll have a resolution, which is completely opposite,” Durkin said.

“What we’re doing is we’re setting a new precedent, a new standard, of how the men and women in this chamber are to be judged in their private lives with this resolution,” Durkin added. “This will open the Pandora’s box. That’s reality. I will just state that there is a place for someone to lodge their objections or complaints. And that’s with the legislative inspector general.”

Morgan framed his resolution as raising one question: “What is conduct unbecoming of a legislator?”

Morgan read the statement Miller made in a Facebook Live post on Jan. 6 at the Save America Rally.

“I think it’s important to know we are engaged in a great cultural war to see which worldview will survive, whether we will remain a free people under free market capitalism or whether they will put us under the tyranny of socialism, communism and the dangerous Democrat terrorists that are trying to destroy our country,” Miller, 66, said in the video that has since been removed from his page.

Morgan said Miller “stood with the insurrectionists” on Jan. 6.

“That’s an indisputable. But if Rep. Miller regretted his words or was remorseful for his actions, he hasn’t shown it. That I think is really the most critical element of all this,” Morgan said.

The resolution was adopted, 57-36, almost entirely along partisan lines, with several members voting present or not voting at all. House resolutions only need a simple majority to pass.

Only one Democrat, Rep. Mark Walker of Arlington Heights, crossed party lines to vote against the resolution.