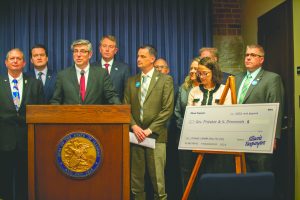 SPRINGFIELD — House Republicans on May 22 repeated their opposition to a graduated income tax amendment touted by Democratic Gov. J.B. Pritzker.

In the fourth news conference in as many weeks, a group of mostly freshmen representatives spoke of alternatives to a graduated tax such as pension reforms, increased investment in education and pro-business measures, but did not introduce legislation.

They also again raised concerns about the state’s high tax burden and outmigration, and the Legislature’s ability to raise the graduated tax rate at any time — the same authority it currently has over the flat tax rate.

“Despite having the highest combined state and local taxes in the nation, Illinois has the third worst funded pension system in America, we have billions of dollars in unpaid bills, and we are among the least prepared states for an economic downturn because we have no rainy day fund,” Rep. Blaine Wilhour, a Beecher City Republican, said. “We must focus on putting policies in place that unleash the economic engine in the state of Illinois.”

Wilhour said the state needs to have “tough conversations” about pension reform, which would also require a constitutional amendment, and should look to decrease mandates and regulations on business.

Rep. Mike Murphy, a Republican from Springfield, said the state needs to better prioritize its spending. The largest driver of property tax expenses is local schools, Murphy said, and the best way to alleviate those burdens is to allocate more state funding for K-12 education.

While the state has the “primary responsibility” for funding public education according to its constitution, Murphy said it funds far below 50 percent of K-12 education costs.

“If we would actually live up to our obligation, we would take stress off the local homeowners,” he said.

The state spent more than $12 billion on K-12 education in fiscal year 2019, with $6.8 billion of that spent on general state aid that is distributed by the new evidence-based funding formula.

The evidence-based model calls for another $350 million to be spent on general state aid distribution every year and drives funding increases to the neediest districts. But estimates from the Center for Tax and Budget Accountability show $350 million in added funding each year won’t bring all of the state’s school districts to a point of funding adequacy until 2050.

Per CTBA’s estimates, the state would need to increase funding by $779 million each year to make up a $7.35 billion education funding shortfall and meet adequacy levels within 10 years as specified in the evidence-based funding legislation.

Murphy, who is part of the House’s higher education working group, said members of the group identified several cuts they were willing to make to state programs. He added that when an $800 million state tax revenue estimate increase was announced earlier this month, he differed from Republican leadership as to how he thought the newly-projected revenues should be spent.

“Our leadership made a proposal to fund our priorities. That wouldn’t have been my proposal, my proposal would have been, we had an agreement two weeks ago, let’s stay with it, let’s use this extra money to pay off some debt or to fund K-12 (education),” he said. “Instead, they didn’t go with our suggestion. … Instead they backfilled some programs that we decided we could live without two weeks ago.”

Reached for follow-up, the only program Murphy identified specifically as worthy of cuts was a Grow Your Own Teacher program which received $1.4 million in funding in fiscal year 2019. He said ongoing discussions prevented him from naming other programs.

Later in the day Wednesday, Republican Deputy Minority Leader Tom Demmer, of Dixon, sent an internal memo outlining Republican budget priorities which include a $200 million supplement on top of the state’s mandated pension payment and $250 million to pay down the backlog of unpaid bills which sits at about $7 billion.

The graduated tax constitutional amendment could come before the full Illinois House as early as Thursday.