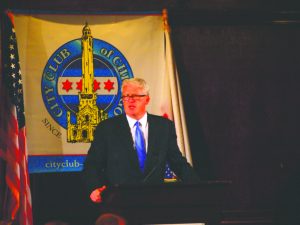 State House Republican Leader Jim Durkin talks to members of the City Club of Chicago about his concerns with a graduated income tax. “We should not be putting this much political capital in this measure which will not go into effect for another two years,” he said during his April 24 address. (Kevin Beese/Chronicle Media)

If changes are going to be made to the Illinois Constitution, the focus should not be on changing the income tax rates, according to the leader of state House Republicans.

Jim Durkin of Westchester, Republican leader of the state House, said far more progress in the state would come from changing the pension laws rather than income tax laws.

“You want to change the Constitution? Let’s start with the biggest problem we have: the public pension system,” Durkin said during an April 24 appearance before the City Club of Chicago. “Change the pension clause, the impairment clause of the pensions. I can’t think of anything that is more stressful, something that is the biggest challenge we have as a legislature other than public pensions.”

Shifting the state to a graduated income tax would need to be voted on by Illinois residents in 2020. In order to put the issue on the ballot, 71 House members would have to support the move. There are 72 Democrats in the House right now so the proposal could get put on the ballot with no Republican support, but that would mean getting nearly unanimous support from House Democrats.

“The battle will be in the House of Representatives,” Durkin predicted. “They need 71 vote to be able to pass it in the House … There’s no support in the House Republican Caucus of any member to support this constitutional challenge. I do believe (Democrats) are short at the moment.”

He said a lot of goodwill was used in getting representatives in central and southern areas, especially near bordering states, to support the minimum wage hike and he is not sure those representatives will be as supporting this time around.

“It’s going to be close,” Durkin said of the House vote to advance the constitutional amendment. “My commitment is that this is not a way to solve our problems. It sounds easy. Let’s beat up on the 6 percent and say 94 percent won’t have their taxes changed, which is a little bit different from a couple months ago when they said taxes were going to be lower for those 94 percent.”

Durkin said the problem with going to a graduated tax system is that those rates will be set on the whims of lawmakers looking to fill budget deficits.

“To me, that’s not the way to go about it. The one last protection we have as taxpayers is in the Constitution called the flat tax,” the House Republican leader said. “Every state similar to Illinois that has seen this runs deficits.”

He said when $250,000 earners leave the state to avoid the higher tax rate, the burden for funding state government will fall on the middle class.

“We should not be putting this much political capital in this measure, which will not go into effect for another two years,” he said.

Durkin said the state faces $133 billion in pension debt and $7 billion in unpaid bills and still has some of the highest taxes in the country.

He said the graduated income tax would “abolish the one protection as taxpayers we have left from this prolific band of tax hikers in Springfield.”

Durkin labeled the flat tax as the true fair tax, saying the middle class has to be officially on notice that a graduated income tax system will wind up being a tax hike on them.

The House Republican leader said the Democratic plan would raise taxes and then raise them again with the hope that the Democratic majority would get its act together and stabilize state finances by paying down debt “although they’ve never been able to do this in the past.”

“Promises made, promises not kept” Durkin said. “And to bring stability to our finances we are being asked to shortchange pension funding to the tune of about $900 million. Does that sound familiar? The previous governor did that. It didn’t work out too well for him either.”

He said 10 years from now, lawmakers would be looking at raising taxes again to pay for the $900 million being deferred now in pension payments.

Along with expressing his concerns about a graduated income tax, state House Republican Leader Jim Durkin addressed other political topics during an April 24 appearance before the City Club of Chicago.

Among the issues Durkin addressed were:

He said he already has a relationship with Chicago Mayor-elect Lori Lightfoot as she and one of his brothers have been on parallel career paths.

The Westchester Republican said he was impressed with Lightfoot making a trip to talk with legislators in Springfield even before she was sworn in as mayor.

“That has not happened anytime in my tenure in Springfield,” said Durkin, who has served in the state capital since 1995. “There hasn’t been a (Chicago) mayor down there in more than 20 years. The fact that she came down to introduce herself is extremely important. It wasn’t just a meeting with the four legislative leaders and the governor. She took time to meet members of my (Republican) caucus. She was on the floor of the House of Representatives taking questions, introducing herself, taking pictures.

“To me, goodwill is extremely important in Springfield. For decades, there has been a distance with the mayor of Chicago and many members of the legislature. That’s why you hear Downstate members talk about secession and other ideas, which, you know, it’s all rhetoric. People in the legislature have not had an opportunity to get to know any sitting (Chicago) mayor.”

Durkin said he expects a capital bill to be presented to the legislature for the first time in 12 years.

“Capital is something that is long overdue … I don’t think you have to be a rocket scientist to realize that we do have infrastructure problems, problems with our roads and bridges,” he said. “We are in the midst of having negotiations with the administration and working groups to determine perimeters, size and scope, but those are easy. The difficult part is how do you fund it.

“All the options are going to be on the table. I’m not going to say that any one in particular is preferred, but there have been at least a dozen options of revenue sources for capital. I am more confident right now that we will leave Springfield by the end of May with having a solid, responsible, fair capital program in Illinois.”

Bringing back the rollback

Durkin said reinstituting the 2011 income tax rollback was a necessity because things simply didn’t work out.

“Tax increases have been sold, you’ve heard the speeches in the past, you’ve all seen it, ‘Time to put our big boy pants on. Let’s get the bills paid.’ It just didn’t work out. But until you deal with the spending in state government, how do you keep going back to the well? You just can’t keep doing that.

“So when the governor gave his budget address — and I understand budget addresses are about wish lists; you’ve got to be able to say where we should go — but when the governor said ‘I need an additional $1.2 billion for next year,’ it sends the wrong message on where our priorities are for this state and also for state government.”