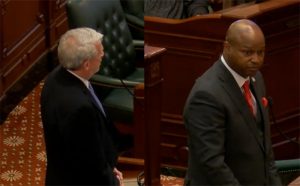 House Minority Leader Jim Durkin, R-Western Springs, left, is pictured on the House floor Tuesday during a speech in which he and Speaker Emanuel “Chris” Welch called for greater civility in House chambers. (Credit: Blueroomstream.com)

SPRINGFIELD – In the first half-hour of House session Tuesday, Feb. 22 at the Capitol, the leaders of each party made calls for civility, two lawmakers recounted their recollections of a House floor altercation, and three Republicans were removed from the floor for not wearing masks.

Both House Speaker Emanuel “Chris” Welch, D-Hillside, and Minority Leader Jim Durkin, R-Western Springs, had a message for the members of the chamber: The public is watching and it’s time to get to work.

Tensions have been high on the House floor in recent days as Democrats have repeatedly called for the removal of GOP members who refuse to wear face coverings.

The chamber approved masking and temperature requirements when they first returned to session amid the COVID-19 pandemic. They say a member should be masked unless eating, drinking or talking into a microphone.

But from Tuesday to Thursday last week, several GOP members refused to wear face coverings, accusing Democrats of hypocrisy for enforcing mask requirements on the House floor, but not at fundraising events, and faulting the majority party for not taking votes on the governor’s authority to issue statewide mask mandates.

That led to a Thursday, Feb. 17 motion by Rep. Lakesia Collins, D-Chicago, to remove nine Republicans from the floor for failing to comply with House rules.

But it was Collins’ inclusion of state Rep. Steve Reick, R-Woodstock, in her initial motion to remove maskless members that led to the altercation.

Reick, who was not disobeying the floor mask mandate, confronted Collins on the floor shortly after the motion. The Democrat reported that she felt threatened when Reick pointed a finger in her face and allegedly told Collins to keep his name out of her mouth.

Other lawmakers came between the pair, and about 10 minutes later, Reick said he attempted to apologize, but was told by Welch and others that the time was not right.

Collins, in a floor speech, noted her mother died when she was five, and she experienced “trauma after trauma,” including verbal, physical and sexual abuse.

“So in that moment when I was confronted by my colleague, and what my colleague said to me in that moment, I was triggered. I was scared. I felt unprotected,” she said. “And I was shocked that this even transpired.”

While Collins said Reick did try to apologize shortly afterward, it wasn’t the right time in her mind because she felt unsafe.

“As a Black woman, we are told to be strong, but at the same time to be quiet, to tone down, don’t be too aggressive,” she said. “And our concerns oftentimes go unheard. …I hope that we can all put this behind us and keep the people we represent at the forefront.”

In his response, Reick said his actions Thursday could “to some extent” be attributed to his upbringing as well.

“I was taught that you don’t take an insult, you don’t take something that is wrong lightly,” he said. “And when I heard my name being mentioned as one who was violating the mask mandate, I took umbrage at that because I’m also a rules guy.”

Reick said he follows the rules, even if he disagrees completely.

He said he regretted the words and actions he used Thursday when confronting Collins, and he added there was no intent to cause harm.

“One of the other things I was brought up with was the fact that if you screw up you make it right right away,” he said. “You don’t wait until it’s good for you to do it. You make sure that you make amends immediately upon having made a mistake, and that’s what I tried to do, but I was not allowed to do that.”

Over the weekend, Rep. Kam Buckner, D-Chicago, who is the House chair of the Illinois Legislative Black Caucus, wrote a letter to Reick requesting a public apology, because the incident took place on the House floor. The letter and altercation were first covered by Politico.

Reick took issue with the public nature of the fallout.

“And there are those who will perceive this as having been done as a result of demands and threats of unspecified sanctions,” he said. “I’m offering up an apology but it’s no different than the apology I would have offered up had she been willing to listen to me 10 minutes after this happened and this never would have had to occur. That’s how you do these things in my world.”

Republican Leader Jim Durkin called Reick a decent man who he’s known a long time, but he said got to know Collins in the morning meeting in the speaker’s office.

“It’s given me a greater understanding of how she approaches life, but also how she approaches this position,” he said. “It’s a great story, Rep. Collins, and you should be proud of it. But at the end of the day, we are here to solve problems. And I’m going to continue with that approach.”

Durkin said in the morning meeting, the four lawmakers “did what adults do” in sitting down and talking about their issues.

“And if that happens again, we’ll do it again,” he said. “But just remember that we are being watched by so many and so many people rely upon us that we owe more to our constituents than to name call, criticize people unfairly, and to lack the respect that this chamber deserves.”

Wilhour, who was also one of the nine removed last week, is suing Welch for the mask mandates, asking a judge to prevent the speaker from removing him from the House floor. He is represented by Thomas DeVore, a frequent litigant against Gov. JB Pritzker’s mandate authority, who announced this week he is running for attorney general.

After Durkin and Collins were done speaking about civility, Rep. Andrew Chesney, a Freeport Republican who was one of the nine removed from the floor last week, said the floor mask mandate should be enforced consistently.

Welch pointed out the House rules were adopted by majority vote, and they’re in place to prevent COVID-19 outbreaks among members and staff.

“More importantly, we have colleagues in this body who have children or family members who are immunocompromised or ill. Let’s do our part,” he said.