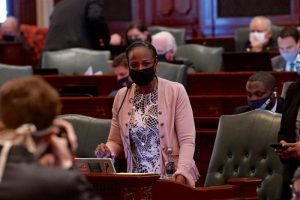 Rep. Carol Ammons, D-Urbana, introduces House Bill 3447 Wednesday, April 21 on the floor of the Illinois House of Representatives. The bill would reclassify possession of small amounts of drugs to a misdemeanor from a felony. (Photo by Lee Milner/Illinois Times)

SPRINGFIELD — A bill to lessen penalties for possessing and selling small amounts of drugs, including heroin and cocaine, narrowly passed out of the state House of Representatives Wednesday, April 21 after a contentious debate.

The discussion over House Bill 3447 provoked strong emotions on both sides of the aisle, passing by a 61-49 vote, or just one more than was needed to pass.

The bill — filed by Rep. Carol Ammons, an Urbana Democrat — would reclassify small amounts of drug possession from a low-level felony to a misdemeanor.

For example, a person who possesses less than three grams of heroin would be charged with a Class A misdemeanor. Currently, that offense would be charged as a Class 4 felony, which carries a one- to four-year prison sentence.

It would also reclassify some low-level drug dealing offenses as a Class 4 felony, from a Class 3 felony.

Ammons said the impetus for the bill came in part from a constituent who was forced to leave a state university after being charged with a felony for illegally possessing a prescription medication, which the student was addicted to.

“This initiative will give them an opportunity to true treatment as opposed to putting a felony on people for possession of drugs,” Ammons said. “It will also remove the barrier to housing and jobs that comes along with giving people felonies. Our goal and our initiative is to level the playing field and give them true opportunity to treatment, as opposed to saddling them with felony convictions that unfortunately we have to unravel later.”

Rep. Kelly Cassidy, a Chicago Democrat and a co-sponsor, said the bill is a necessary response to the lack of appropriate drug treatment in the state’s jails and prisons that frequently leads to overdose deaths once a person is released.

“It is well past time to start addressing addiction as a public health issue, not a criminal justice issue. We don’t need to continue to get people tied up in a system, when what they need is health care. They don’t need a cage. They need treatment, and they need quality treatment,” she said.

House Minority Leader Jim Durkin, of Western Springs, who is a former assistant state’s attorney in Cook County, said he opposed the bill because it would benefit individuals charged with drug possession but who should have faced drug dealing charges.

“Here’s a typical situation, you have an area, anywhere in the state of Illinois that has a lot of activity, crime activity, and also a history of drug activity. These (police) officers will see an individual on a street corner, they will look in his direction, that person will drop bags on the ground, and possibly flee,” Durkin said.

In these cases, prosecutors are only able to charge the person with possession rather than distribution of drugs because of legal precedent, he said.

“So those are the people who are going to get the benefit of this bill. A lot of them are drug dealers, and I have zero tolerance for that,” Durkin said. “Mark my words, it’s a mistake.”

The bill applies, retroactively, so it would allow individuals whose offenses have been reclassified as a lesser felony or a misdemeanor to seek resentencing for their conviction.

It also would enable any circuit court or state’s attorney to create a misdemeanor drug program for low-level drug offenders to obtain addiction treatment. The program would not be available to anyone who is charged with a crime involving violence. A person who successfully completes the drug treatment program would be eligible to have their charges dismissed.

The bill would also expand the types of drug possession offenses that an individual convicted of a crime can seek to have expunged or sealed by a court. Under the bill, individuals who are convicted of a misdemeanor drug possession offense or who complete a diversion program for misdemeanor drug offense can ask the court to expunge or seal their criminal records.

Rep. Jeff Keicher, a Sycamore Republican, spoke against that provision.

He said one of his cousins died of an overdose from heroin laced with fentanyl and he condemned the possibility that the person who gave his cousin those drugs could have their record expunged under the bill.

Keicher, with his voice cracking, expressed frustration over the “people that will continue to flaut the law and seek every chance they can to continue to damage lives beyond their own, because that is their path in life.”

The bill goes to the state Senate where it must receive at least 30 votes to pass.