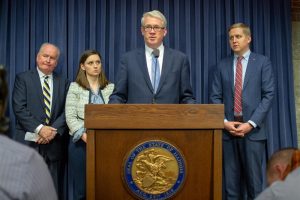 Illinois House Republican Leader Jim Durkin, of Western Springs, speaks to the media Feb. 18 at a news conference at the Capitol that Republicans called to address the state budget. Republicans called for balancing the budget through a collaborative approach with Democrats that does not rely on new taxes. Pictured with Durkin are (from left) Rep. Dan Brady, R-Bloomington, Rep. Avery Bourne, R-Raymond, and Rep. Tom Demmer, R-Dixon. (Photo by Jerry Nowicki/Capitol News Illinois)

“Let’s go back in time to last spring. Through a bipartisan effort and agreements in both chambers, we were able to craft a balanced budget with no new taxes for fiscal year 2020,” House Republican Leader Jim Durkin said Feb. 18. “That was a great and successful example of give-and-take negotiations.”

Those priorities were added to the budget late in the legislative session after weeks of Republicans claiming their voices were not being heard by the Democratic governor.

“We have learned by example when we work together in a bipartisan manner, we respect each other’s priorities, we can accomplish and have accomplished great things for our state,” Durkin said. “If that same willingness exists today, we can come back with the same result, a balanced budget that protects the citizens of Illinois with no new taxes, nor any tax increases.”

New taxes passed on parking garages, cigarettes and gasoline last year, as well as increased driver’s license and other fees, went to fund a multi-year capital infrastructure plan — not the state’s operating budget. That proposal had bipartisan support as well, including a vote from Durkin.

This year, Durkin said, the budget shouldn’t depend on “hypothetical revenues” that could result if the governor’s signature proposal — a constitutional amendment creating a graduated-rate income tax structure charging higher rates on higher income earners — is voted into law in the November general election.

In last year’s budget address, Pritzker said the fiscal year 2020 budget, which ends June 30, was a “bridge” to when greater revenues — an estimated $3.4 billion — become available from the graduated income tax.

“We should discuss real money, not money that is based on hypotheticals or possibilities down the road. The issue at hand is what we have to deal with this fiscal year,” Durkin said.

“In the projected revenues for the state for next year, just in the three largest areas of personal income taxes, corporate income taxes, and sales taxes, we have projected growth of nearly a billion dollars in new revenue, thanks to a strong economic performance across the state the last year and continued growth that we’ve seen across the country,” he said.

He said appropriations committees could prioritize where any new funding could go, such as increasing the budget for the Department of Children and Family Services, a proposal Pritzker is expected to support in his budget address Wednesday, according to several news outlets.

“Rank-and-file members should be involved in how we allocate the new revenues that are a result of economic performance and growth and not the result of new tax increases,” he said, adding new revenues can be combined with “commonsense ways to reduce spending in government that seem at least to have bipartisan support right now.”

He said the “stability” of that increased funding should be able to carry into fiscal year 2021 with “bipartisan support.”

Pritzker’s budget address is scheduled for noon Wednesday in Springfield.