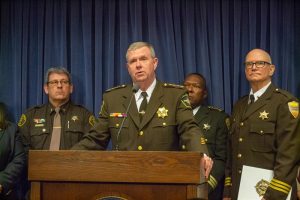 Kankakee County Sheriff Mike Downey – one of the sheriffs involved in a lawsuit against the state regarding transfers from county jails to state prisons – is pictured in a file photo at the Illinois Statehouse in February. (Capitol News Illinois file photo)

It’s the latest action in a lawsuit filed on behalf of 89 county sheriffs against Gov. J.B. Pritzker and the director of the Illinois Department of Corrections.

Since that order was issued, there were 1,226 transfers from county jails to IDOC facilities, according to department spokesperson Lindsey Hess.

Hess said in an email that on Aug. 4, Graham Reception and Classification Center in the Montgomery County city of Hillsboro “unknowingly accepted” a COVID-19 positive man from Logan County Jail.  The transfer was separate from one at the same facility in which seven prisoners were denied entry because two of them tested positive for the virus, Hess said.

The spokesperson said 20 staff and one additional inmate have tested positive for the virus at that facility since the transfer occurred. The correctional workers are quarantining at home and the prisoners are isolated.

Hess said transfers were halted following the appellate court’s decision as counties administer COVID-19 tests 72-hours prior to transfer and the department is awaiting those results. She said intakes will resume on Thursday.

That replaced Executive Order 13 from March 26, which halted all transfers “with exceptions at the sole discretion of the Director of the Illinois Department of Corrections for limited essential transfers.”

The sheriffs had argued that the protocols put in place by IDOC after the issuance of Executive Order 50 — which include requirements for social distancing, temperature checks, quarantine and testing, among others — were unduly burdensome.

They noted a transferee must have had a negative COVID-19 test taken within three days of transfer, but many tests take five or more days for results to arrive. If an inmate had to leave the premises for a test, it would reset a 14-day quarantine period required before transfer.

A spokesperson for the Illinois Sheriffs’ Association said in an email Wednesday they will “continue to evaluate the protocols and responsibilities established under (Executive Order 50) to determine if they can be achievable for all sheriffs.”

The court addressed those arguments.

In a special note concurring with his fellow appellate justices Lisa Holder White and John Turner, Presiding Justice Robert Steigmann noted he believes Executive Order 50 “addresses the legitimate concerns of the parties, is a good faith attempt to balance the competing interests of the parties and the public, and should be given the chance to accomplish its purpose.”

If IDOC does not apply the order in good faith, “the matter could be brought to this court’s attention for reconsideration and possible vacation of the stay,” he wrote.

“We are obviously disappointed in the court’s decision to grant the stay of the preliminary injunction,” the Sheriffs’ Association spokesperson said. “However, we continue to be willing to work with IDOC on this issue as we have from the beginning of the pandemic to move IDOC sentenced inmates into their care.”

Hess, from IDOC, said the ruling allows the department “to implement its plan to safely resume admissions from the counties,” pointing to the safety protocols that were issued on July 27, prior to the Logan County court order.

“We are committed to working with the county jails to accept new admissions in a manner that protects the health and safety of staff, the incarcerated population and the surrounding community,” she said in a statement.

As of Wednesday, Aug. 26 IDOC’s website indicated there were 457 staff and 774 incarcerated individuals confirmed to have contracted COVID-19. Of those, 334 staff and 491 inmates have recovered, according to the data