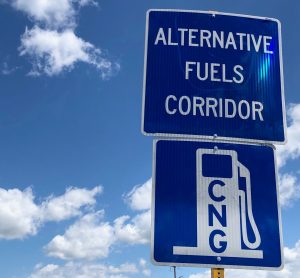 Alternative fuel signs are now appearing along Illinois interstates and more will be going up this summer. (Photo courtesy of IDOT)

The Illinois Department of Transportation said that more than 30 Alternative Fuels Corridor signs have been posted on interstates statewide, with another 20 going up later this summer. The signs further Gov. J.B. Pritzker’s goal of expanding the adoption of electric vehicles across the state and are part of a national effort to promote alternative fuels.

“At IDOT, we take great pride in working with our federal partners to benefit Illinois communities at the local level,” said Illinois Transportation Secretary Omer Osman. “These signs not only further our mission under Gov. Pritzker to clean transportation options but provide an economic boost to cities and towns that rely on interstate travel.”

The Federal Highway Administration has designated 145,000 miles of interstate for promoting alternative fuels, including along Interstates 39, 55, 70, 74, 80, 90 and 94 in Illinois. The signs are posted or will be installed at the following locations, alerting drivers that they are traveling in areas with opportunities to refuel:

District 3
Eastbound I-80 at Illinois 47 interchange

In Illinois, the first signs will focus on electric charging stations, but additional ones in the future will point out locations for compressed natural gas, liquefied natural gas, hydrogen and propane fueling stations.

Pritzker is targeting 100 percent renewable energy in the state before 2050, with a goal of putting 1 million electric vehicles on the roads in Illinois by 2030.