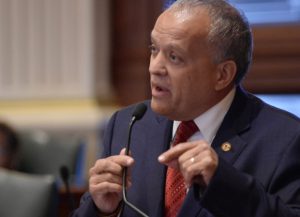 CHICAGO — State Rep. Luis Arroyo, a Chicago Democrat charged by federal officials with bribery, officially resigned from office Friday, Nov. 1 just hours before a special investigative committee was to begin considering whether he should be expelled from the General Assembly.

In a letter submitted Friday morning to House Speaker Mike Madigan and other members of the chamber, Arroyo did not apologize or admit guilt, but said he was no longer able to serve effectively.

“My respect for you is such that I have decided that continuing my public service would cause a distraction to this august body,” he wrote. “But more importantly, it is my sincere desire to spare the members of this body from having to take such a difficult vote at a time when you are all running for re-election considering how well we have all worked together.”

Arroyo said his resignation was effective at 5 p.m. Friday. Democratic precinct committee members in the 3rd District will select a replacement to serve the remainder of his term.

After receiving the letter, Madigan issued a statement saying the allegations against Arroyo were “beyond anything that could be considered a lapse of judgment or minor indiscretion.”

“These allegations are beyond extraordinary, which is why it called for the creation of the Special Investigative Committee and possible disciplinary action,” Madigan said in the statement. “While every circumstance will not require this process, the egregiousness of these particular allegations and the evidence demanded that every effort be taken to restore the public’s trust.”

Arroyo, 65, a native of Puerto Rico, had represented the 3rd District on the west side of Chicago since 2006. But his political fall came swiftly after he was arrested Friday, Oct. 25, on a charge that he attempted to bribe a state senator who was working undercover and wearing a wire.

According to an FBI affidavit filed in federal court, Arroyo allegedly agreed to pay the unnamed senator $2,500 a month for as long as a year in exchange for the senator’s support of a bill authorizing electronic sweepstakes machines. Arroyo owns a lobbying firm that lobbies the city of Chicago, and one of the firm’s clients has an interest in the sweepstakes machine industry, according to the affidavit.

“This is, this is the jackpot,” Arroyo allegedly told the senator during an Aug. 22 meeting during which Arroyo is said to have made the first $2,500 payment.

Arroyo made his first court appearance Monday, which was also the first day of the General Assembly’s veto session. News of his arrest sparked a flurry of new legislative initiatives from both parties aimed at tightening the state’s ethics laws.

“Although the disciplinary process will no longer proceed, there is still a focus on strengthening our laws to prevent this unacceptable conduct,” Madigan said in his statement Friday. “I look forward to working with the governor and other legislative leaders to look for ways in which we can continue to improve the safeguards we have today.”